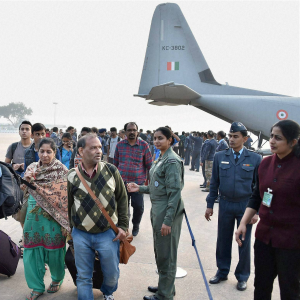 CHENNAI: The torrential rains slowed down considerably in Chennai on Saturday, leaving a window open for rescue and relief works to be stepped up.
OP Singh DG, NDRF said this was the most massive deployment in any flood situation and that they had deployed 50 teams in Tamil Nadu. “We have helped more than 16,000 people reach safety in different parts of the state,” he said.
He added that extensive use of social media helped them a lot this time. “We have given out and received real time information which helped us a lot,” he said. Emphasizing on the large scale of the relief work, he added that the operation consisted of more than 1500 jawans and over 200 inflatable boats are still at work rescuing people.
However, thousands of citizens continue to be marooned with several areas inundated and many people have been stuck in their homes without any food, water or electricity.
Minister of State for Civil Aviation Mahesh Sharma said that it would take a couple of days for Chennai airport to begin functioning. “Commercial flight services cannot start at Chennai airport as of now, we should give it 2 days,” he said. He added that once the power supply is restored in the city commercial flight services would be restarted.
According to sources in Chennai says that power and phone networks are still down in many areas, even as people continue to search for missing family members. The city has rallied together in the difficult time and many volunteers have been aiding rescue efforts, she added.
“A bus of volunteers and items with blankets and other essentials will be leaving hotel Savera at 9 am to Mudichur. In addition, there have been requests for 5,000 sanitary napkins needed in Maduravoyal,” she said.
Meanwhile, Arakonnam naval base, located 70 kms south of Chennai, and the Tambaram Air Base, nearly 30 kms outside the capital city, have become the two nerve centres on the rescue operations map. Over 600 rescued people were ferried on Friday from the base named ‘INS Rajali’.
Support has also been pouring in across the country to Chennai as relief funds, supplies and amenities are making their way to the rain-hit state. Several social media accounts like chennairains.org, @ChennaiRainsOrg, @AidOffered have been co-ordinating rescue and aid operations by volunteers across the city. Twitter hastags such as #chennairain, #ChennaiFloods, #chennairainshelp, #chennaimicro are being used for spreading information about relief work and using it to send and ask for help.