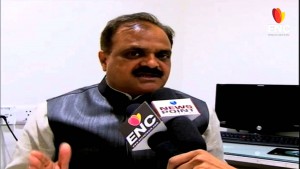 PATNA: The Bharatiya Janata Party candidate from the Nokha Assembly constituency in Rohtas district of Bihar, Rameshwar Prasad Chaurasia, could emerge as an “Extremely Backward Class dark horse” CM face of the National Democratic Alliance. The four-time BJP MLA is known for his proximity to Prime Minister Narendra Modi.
A bachelor, Mr. Chaurasia, 49, has been winning the polls from the constituency since 2000, though his caste vote (Chaurasia community) is negligible there. But Mr. Chaurasia has been getting support from a sizeable chunk of the Nonia and Bania castes and even the dominant upper caste Rajputs.
At a time when most of the State BJP party leaders led by Sushil Modi were seen supporting Nitish Kumar for PM, Mr. Chaurasia was in Gujarat rooting for Mr. Narendra Modi. The articulate BJP leader became close to Mr. Modi and was even made in-charge of the Delhi State unit. Later, he was also appointed co-in charge of the party in Uttar Pradesh.
Party sources told  that in a bid to counter the rivalry between Other Backward Class leaders in the State BJP and the OBC face of rival parties for the CM post, the BJP could pick a leader from the extremely backward caste. Senior State party leader and Union Minister Giriraj Singh too had said the BJP’s CM would be from the EBC category.
“In such a situation, Mr. Rameshwar Chaurasia could emerge as a “dark horse,” a senior BJP leader told The Hindu. However on Monday, party leader Syed Shahnawaj Hussain took the name of another EBC MLA from Gaya — Prem Kumar — as the party’s choice, but later said he was “misquoted.”
Meanwhile, Mr. Chaurasia has been campaigning hard to retain his seat. Every morning, he comes out from a hotel room in neighbouring Sasaram town and sets off on his campaign in Nokha which goes to the polls on October 16.
“I was so tired that I had to skip dinner last night… there is little time left for the campaign but I will win with a comfortable margin this time too,” Mr. Chaurasia told The Hindu over phone from the venue of a meeting where Home Minister Rajnath Singh was among the speakers on Sunday. On Tuesday, party president Amit Shah addressed another poll meeting in Nokha.
Image problem
“He appears in a tough contest this time as his image now that of a high-flying leader who hardly cares for his constituency,” rued Manoranjan Chaudhury of Nasriganj.In the adjacent block of Rajpur, a group of villagers too felt that Mr. Chaurasia “rarely visits” his constituency.
Nevertheless, the “weak” profile of Mr. Chaurasia’s rival candidate — Anita Devi — might work to his advantage, said Pappu Sah at Nokha chowk.