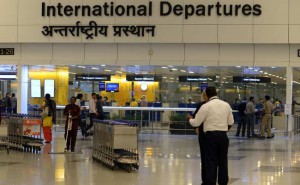 NEW DELHI: Twenty-two iPhone 6S have been seized by the customs officials from one of the toilets at the Indira Gandhi International Airport (IGIA) in New Delhi, ahead of their launch on Friday. The phones were detected by the personnel of Central Industrial Security Force, involved in the airport’s security, last night.
“They were handed over to the customs,” said Vinayak Azaad, Additional Commissioner of Customs at IGIA. The customs officials are looking into the role of a Punjab-based passenger, who had come from Dubai. He might have kept these devices in for somebody to pick it up, Mr Azaad said.
The US-based tech giant Apple will unveil its latest iPhone 6S and iPhone 6S Plus in India on October 16. In a related case, seven youths were detained few days back at the international airport here with 182 iPhone 6S and 6S Plus devices.