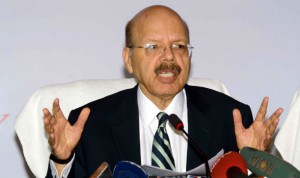 NEW DELHI: Chief Election Commissioner(CEC) , Nasim Zaidi has said that he is in favour of holding Lok Sabha and Vidhan Sabha elections simultaneously. Talking to newsmen in Amritsar today he said it is possible with political resolution only. He said recommendations of Parliamentary Committee in this matter will be discussed and law can be amended.
In Amritsar, CEC reviewed the revision work of voter lists of Punjab in a meeting with the district electoral officers of the state.

Mr. Zaidi said that Election Commission has also recommended that paid news and distribution of drugs during elections should be considered a crime. He said protection against use of force is an achievement of Election Commission. CEC is on two day visit of Amritsar. In today’s meeting Chief Electoral Officer of Punjab, Mr. V.K. Singh was also present .