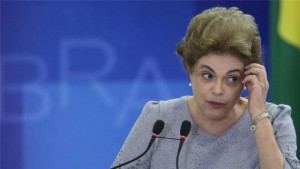 SAO PAULO : In Brazil, thousands of ruling Workers’ Party supporters demonstrated across the country against impeachment of President Dilma Rousseff. The rallies were part of a concerted fight-back by the President as she is facing impeachment proceedings for allegedly manipulating the government accounts during her 2014 reelection. The peaceful pro-Rousseff demonstrators also gathered in 31 cities yesterday.
0000000000
A legal request has been filed to impeach Brazilian President Dilma Rousseff for obstructing justice and fiscal accounting tricks, the second one against the leader politically embattled by her own government.
The request, filed by the Brazilian Bar Association (OAB) on Monday, also involved Rousseff granting international football body FIFA tax-exempt status during the 2014 World Cup.
Listening Post: Dilma Rousseff – Caught in the media firestorm

In reaction to the claims, Tourism Minister Henrique Eduardo Alves turned in a resignation letter on the same day, becoming the first minister from the Brazilian Democratic Movement Party (PMDB) to declare leaving Rousseff’s government.

PMDB, Brazil’s largest political party, is expected to abandon its alliance with Rousseff’s Workers’ Party and cause the collapse of the coalition government.A party vote is expected to be held on the issue on Tuesday.
Rousseff already faces an impeachment process over the alleged manipulation of government accounts that opposition parties maintain helped her win re-election narrowly in 2014 by allowing her to boost public spending.
The president’s supporters tried to physically block the entry of the new impeachment request in the lower house of Brazil Congress, shouting the left-wing slogan “Não passaram!” meaning “They shall not pass”, while pushing and shoving opponents of the embattled president.
Another serious impeachable offence in the new request is the alleged interference by the president in investigations into the massive Petrobras corruption scandal.
The complaint on the issues is based on plea bargain testimony by Senator Delcidio do Amaral, a key legislative ally for Rousseff before he was arrested in November.The OAB added the controversial appointment last week to Rousseff’s Cabinet of her predecessor and mentor Luiz Inacio Lula da Silva, which the lawyers argued was an illegal move to shield him from prosecution in the Petrobras probe.
Talk to Al Jazeera: Dilma Rousseff – Transforming Brazil Lula’s appointment was suspended pending review by the Supreme Court.The bar association, which represents one million lawyers, also listed a complaint that is shared by many Brazilians, that the Rousseff government hurt Brazil’s interests by granting FIFA a generous blanket tax exemption when it held the World Cup in Brazil.
The World Cup generated revenues of $4.8bn for FIFA, against expenses of $2.2bn, according to FIFA’s website.The new impeachment petition will join a dozen others waiting for consideration by the speaker of the house Eduardo Cunha, a fierce critic of Rousseff who himself is facing corruption charges related to the Petrobras case.
Rousseff is struggling to save her presidency in the midst of the worst economic recession in a generation and the widening fraud investigation that started at state-run oil company Petroleo Brasileiro.