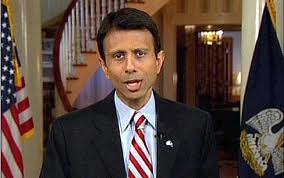 Washington :Top Republican leader and current Governor of Louisiana Bobby Jindal is planning to run for US president in 2016, a top US Senator from his home State has said.”I do think, he (Jindal) will run. He is being running. He would be a significant candidate,” Senator David Vitter told private American TV channel C-SPAN’s Newsmakers programme in an interview.
“I like Bobby, I respect his leadership, I agree with all of his political values. But I haven’t thought about what I would do or wouldn’t do personally,” Vitter said. “Oh yeah. I think that’s very obvious to everybody who has been paying attention,” the junior Senator from Lousiana said when asked if he believes Jindal would to be president.
Jindal’s second term as the Louisiana Governor ends in 2015. He can’t run for the third term. Vitter is considering running for governor. “I would expect we will come to a conclusion sometime in January,” he said.Report-PTI.