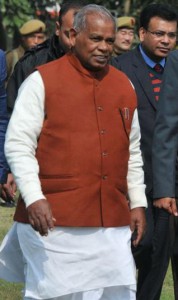 PATNA: Bihar Chief Minister Jitan Ram Manjhi has recommended the dissolution of the Assembly to pre-empt his mentor-turned-rival and Janata Dal (United) leader Nitish Kumar’s attempts to replace him.
On Saturday, Mr. Kumar, who was elected leader of the JD(U) legislature party, is set to stake claim to form a new government and urged the Governor to reject Mr. Manjhi’s recommendation, arguing that he had lost the majority. Twenty Ministers from the Nitish camp had resigned.
Mr. Manjhi is moving with the support of the Bharatiya Janata Party (BJP), say sources in both camps, in a major blow to the attempts to forge a united front against the saffron party ahead of the Assembly elections scheduled for November.
The JD(U) and Lalu Prasad’s Rashtriya Janata Dal (RJD) had buried the hatchet after their defeat at the hands of the BJP in May 2014, but Mr. Manjhi’s rebellion can derail their plans.
Mr. Kumar had given way to Mr. Manjhi, accepting moral responsibility for the party’s Lok Sabha defeat, but Mr. Manjhi soon began to assert himself and placed himself as a Mahadalit leader, causing friction between him and Mr. Kumar.
The lingering tension between the two came to the fore in an interview that Mr. Manjhi gave to The Hindu on January 6, setting off a series of developments that culminated in Saturday’s split.
Some last-minute efforts at truce did not bear fruit, with the Chief Minister holding a marathon meeting with Mr. Kumar at his 7 Circular Road residence.
Sources said Mr. Kumar refused to accept three demands put forward by Mr. Manjhi.Mr. Manjhi left for Delhi on Saturday, where he is expected to meet BJP leaders. Prime Minister Narendra Modi reviewed the Bihar situation with leaders on Saturday.