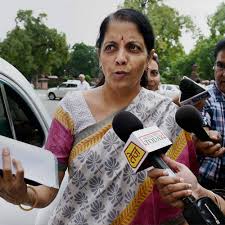 NEW DELHI : BJP leader Niramala Sitharaman on Sunday visited the party’s chief ministerial candidate Kiran Bedi at her residence and told reporters that they were hopeful of winning the Delhi assembly polls.
“We are waiting for the results. We are hopeful that we will win,” Ms. Sitharaman told reporters outside Ms. Bedi’s house a day after the polling for the 70 Delhi assembly seats was held.
A majority of the exit polls, however, are indicating that Arvind Kejriwal’s Aam Aadmi Party is set to return to power in Delhi, relegating the Bharatiya Janata Party (BJP) to the second spot and decimating the Congress, India’s oldest political party.
Asked about Ms. Bedi’s statement in the wake of the exit poll figures on Saturday evening that she would take the blame if the party lost in Delhi, Ms. Sitharaman said, “She has given her personal view but we are hopeful the result will go in our favour.”
According to the exit poll figures, while the AAP is likely to get anywhere between 31 and a staggering 54 seats, the BJP could bag 17 to 35 seats. The Congress, which ruled Delhi for 15 years until December 2013, it is forecast, would be routed, winning no seat or at best four seats.