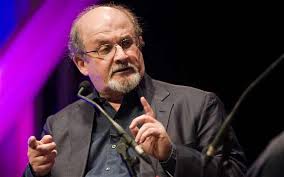 MUMBAI: Writer Salman Rushdie has kicked up a fresh literary storm by lashing out at Jnanpith Award-winning Marathi writer Bhalchandra Nemade and describing him as a “grumpy old b******”
Booker winning Mr. Rushdie’s personal attack on Mr. Nemade came in a form of an angry tweet on Saturday in response to Mr. Nemade dismissing his work as lacking in literary merit.
Shortly after being chosen for the prestigious Jnanpith award on Friday, Mr. Nemade had made the remarks at a felicitation on the same evening at a programme organised by Matrubhasha Samvardhan Sabha in Mumbai.
Mr. Nemade had dismissed the work of Mr. Rushdie and V.S. Naipaul as “pandering to the West”. He said Mr. Rushdie’s works after Midnight’s Children lacked literary merit.
Responding to the criticism, Mr. Rushdie tweeted, “Grumpy old b******. Just take your prize and say thank you nicely. I doubt you’ve even read the work you attack.”
Known to be a proponent of “nativism” endorsing an author writing in native language and a world view that negates globalisation, Mr. Nemade had described English as a “killer language” and said the primary and secondary education should be in mother tongue.

\“What is so great about English? There isn’t a single epic in the language. We have 10 epics in the Mahabharata itself. Don’t make English compulsory, make its elimination compulsory,” he was quoted as saying at the public felicitation. Mr. Nemade himself taught English and comparative language at different universities and retired from the Gurudeo Tagore Chair of English at the Mumbai University.
Mr. Nemade, whose 1963 novel Kosala (cocoon) transformed the form of Marathi novel, is currently working on a sequel of his 2010 tom.