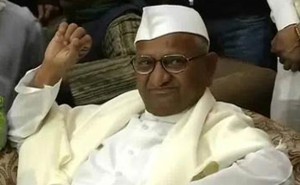 MUMBAI: : Gandhian activist Anna Hazare extended his “best wishes” to his protege and Aam Admi Party or AAP leader Arvind Kejriwal as his party headed for a landslide win in the Delhi assembly election.
“I extend my best wishes to Kejriwalji,” Anna told journalists at his village Ralegan Siddhi in Maharashtra.Mr Kejriwal became a household name when he was a key aide to Anna when the latter launched a hunger strike at the Ramlila Maidan in Delhi in 2011 in support of a Lokpal Bill.
Anna urged Mr Kejriwal “not to forget that ‘andolan’ (struggle) whether or not you are the chief minister”.He said Mr Kejriwal earned people’s trust by taking part in the anti-corruption agitation. “That is why he got so much support now. I urge him not to make the mistakes he committed earlier.”
Anna also criticized the Narendra Modi government for enacting a legislation that makes it easy for authorities to take over land from the farmers.