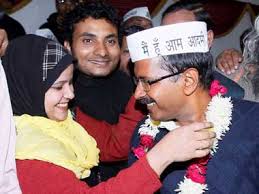 New Delhi:  Arvind Kejriwal has left his Ghaziabad home for the Ramlila Maidan, where he will be sworn in as Delhi’s youngest chief minister at noon today. The 45-year-old taxman-turned-politician and the six Aam Aadmi Party ministers who will be sworn in with him are now using the Metro to reach the venue.
As he stepped out of his home, a woollen scarf wrapped around his head, Mr Kejriwal said, “Today is a historic day…This fight is not about making me the Chief Minister, this is the second fight for Independence.” He promised to free the country of corruption. This is the second fight for independence: Arvind Kejriwal.
A short while ago, Mr Kejriwal received a congratulatory message from his one-time mentor Anna Hazare who also regretted that he would not be attending the oath taking ceremony. The chief minister to be said Anna’s blessings were crucial for him.
Outside his home, people waited long hours to greet and bless him too. “Why CM, he will be PM soon,” said an elderly man in a red turban. Words that were echoed at the Ramlila grounds where about 40,000 people had already gathered by 10.30 am, waving the tricolour in an electric atmosphere of excitement and anticipation. Nearly 1,600 policemen have been deployed for security.
Arvind Kejriwal has said there will be no VIPs at the ceremony today. His family will sit among the rest of the people and watch him taking oath.Mr Kejriwal and his ministers will hold a cabinet meeting this afternoon where portfolios will be handed out. They will then begin work at the Delhi Secretariat.
Mr Kejriwal is expected to issue some executive orders on Day 1. For instance, he has promised to assess whether a steep hike in CNG prices effected on Thursday is necessary.Team Kejriwal will work on Sunday too.  Mr Kejriwal will run a minority government with external support from the Congress. He has to prove he has the numbers in the next seven days.