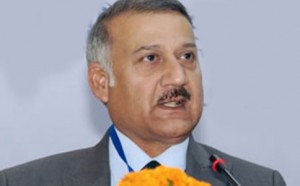 NEW DELHI : Senior IPS officer Anil Kumar Sinha, who was on Tuesday night appointed as the new director of the Central Bureau of Investigation (CBI), took charge on Wednesday.Anil Kumar Sinha succeeds Ranjit Sinha who retired yesterday in a glare of controversy with the Supreme Court directing him to recuse from the 2G spectrum scam case probe.
Speaking at the CBI headquarters here shortly after taking over as the new chief, Sinha said: “I am acutely aware of all the challenges… We are committed to preserve the integrity of the agency.””I seek cooperation from one and all,” he added.Sinha, a 1979 batch IPS officer of Bihar cadre, was the Special Director in CBI.Sinha has been appointed for a term of two years.
The Appointments Committee of the Cabinet, headed by Prime Minister Narendra Modi, cleared the name of Anil Kumar Sinha who was among the candidates shortlisted by the search committee last evening.During the day yesterday, Modi held discussions with the Chief Justice of India and leader of the main Opposition in Lok Sabha on selecting a new CBI head.The panel discussed the names of about 40 officers shortlisted by the Department of Personnel and Training (DoPT), sources said.
Ranjit Sinha retired yesterday after a tumultuous tenure of two years at the helm of affairs in CBI that ended on a controversial note.Sinha’s tenure as CBI chief saw highs like busting of some big bribery cases involving a Railway Board member, Chairman and Managing Director of a public sector bank, Chief Executive Officer of Censor Board among others.
The lows were mainly the criticism he faced from the Supreme Court which asked him to withdraw from 2G probe, criticism from a special court for shoddy probe in coal scam cases, sharing of status report in coal with the then Law Minister Ashwani Kumar after which the agency earned the sobriquet of “caged parrot” from the apex court.