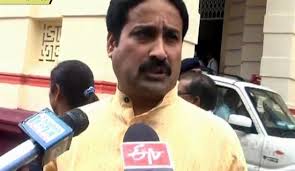 SASARAM: In a shocking incident, a Bihar cabinet minister on Monday escaped a bid by a mob to set him ablaze at a temple in Rohtas district.The incident happened despite the fact that district officials, including the district magistrate and superintendent of police of Rohtas, were present at the venue.
As per reports, Bihar Minister for Art, Culture and Youth Affairs, Vinay Bihari, had gone to the famous Tarachandi temple to attend a cultural programme, which was organised by the local administration on the occasion of the ongoing Navaratra festival.
Vinay Bihari, who is also a folk singer, inaugurated the cultural programme and also sang some religious songs on the occasion.The crowd at the function, however, got annoyed with the poor sound and sitting arrangements at the venue when noted Bhojpuri singer Pawan Singh was performing.
To vent their anger, some people from the crowd hurled chairs towards the dais. One of the chair hit SP Chandan Kumar Kushwaha, following which the police resorted to lathicharge.
The mob then started hurling bricks and stones at the police and other officials. Sensing the angry mood of the mob, the minister and officials had to scurry for cover.The minister later told an English daily that had he not hid under the dais for more than two hours, he would have been burnt alive by the angry crowd.
The mob, however, managed to set alight the official vehicle of the minister.According to the minister, he had overheard during the chaos that a few persons were carrying petrol cans and were looking for him.The minister and about a dozen others received injuries during the incident.
Calling the incident “pre-planned”, SP Kushwaha said six persons have been arrested and raids are being conducted to nab others involved in it. An FIR has also been lodged in this connection against six named and 500 unidentified people.
“The minister was hit with a stone in the chin. We shielded him and managed to pull him out from the crowd before anything untoward could happen. His car was parked near the stage and somebody poured petrol on it and set it on fire before the driver could take it out,” the SP told PTI.

Police officers said they had to try very hard to save the minister, who was in the danger of being lynched by the crowd.

“We have launched investigation in the attack over the minister as the incident seems to have been preplanned. One of the nabbed persons was carrying petrol in a bottle. Why would anybody bring petrol to a cultural function,” asked the SP.