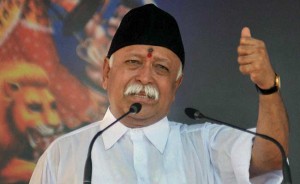 DELHI / NAGPUR: Rashtriya Swayamsevak Sangh (RSS) chief Mohan Bhagwat on Friday addressed a special programme in Nagpur in Maharashtra to mark the Hindu festival of Dussehra.
The speech was telecast on state broadcaster Doordarshan (DD), drawing much flak from opposition parties Congress and Communist Party of India (Marxist), or CPM. “We are dreaming of a Bharat where whatever diversity is there, in our ways, our lives, we will accept each others’ differences,” the 64-year-old Bhagwat said. “In mutual goodwill and love, we have to accept one another.” Hindu nationalist RSS is the ideological parent of the ruling Bharatiya Janata Party (BJP) and its headquarters are based in Nagpur city.
The RSS chief’s address on Vijayadashmi is an annual event but gains prominence this year as the BJP recently won the April-May general elections with a thumping majority. Bhagwat’s speech came hours before Prime Minister Narendra Modi’s first ever radio address.
In this new communication initiative, Modi will reach out to some 90% of the nation’s population, including those in its remotest parts, through All India Radio (AIR). Doordarshan, however, said it was covered like any other news event and no special arrangements had been made.
“It was just like a news event to us. So we covered it,” Doordarshan’s DG (news) Archana Datta said, after the DD’s hour-long live telecast of the RSS function. Datta said there was “no special arrangement” that had been made for the event and one of the several digital satellite news gathering vans (DSNG) that the broadcaster has in Maharashtra for coverage of the state elections was used for the event.
Congress and the Left accused the government of misusing the state broadcaster.
Congress spokesperson Sandeep Dikshit termed the telecast as a “dangerous tradition”, saying the RSS is a controversial religious and political organization. CPM said “the RSS uses the occasion propagate its Hindutva ideology.
The national public broadcaster has no business to telecast live the speech of the chief of an organisation like the RSS.”
Prime Minister Modi also hailed Bhagwat’s addresss and said the issues of social reform he raised are “very relevant” today. “Mohan Bhagwat ji talked about important national issues in his speech. The issues of social reform that he raised are very relevant today,” Modi tweeted. Modi also gave an online link of the summary of Bhagwat’s address.
In his speech, Bhagwat said, “Different caste, creed, different visions, communities, worshipping, ways of living, food, culture are not important and they will continue to exist. We should accept everyone as one and all should be equally respected.”
He has been the RSS chief since 2009.
“We don’t have a magic wand to change but the government seems committed,” he said. “A new ray of hope has entered in the hearts of the people. The entire country was feeling proud of the visit and the subsequent talks with the US government,” Bhagwat said while talking about Modi’s visit to the US.
“It was a news-worthy event,” said Prakash Javadekar, Minister for Information and Broadcasting. Doordarshan officials too made the same argument, which did not wash with the opposition.

“Doordarshan is run by public money. So how is government using it to broadcast the RSS Chief’s speech?” asked Rashid Alvi of the Congress. “The RSS uses the occasion to propagate its Hindutva ideology,” said the CPI (M) declaring Doordarshan “has no business” in broadcasting the speech.
The annual Vijaya Dashami address articulates the RSS’s vision and agenda for its 4.5 million volunteers, who played an invaluable role in the electoral victory of Prime Minister Narendra Modi in May, who was an RSS volunteer for many years before joining the BJP.
RSS leaders denied that the organisation would be a “remote control” over the new government, but a strong role referred to as “advisory” has been underscored by two senior RSS leaders, Ram Madhav and Shiv Prakash, being deputed to the BJP.