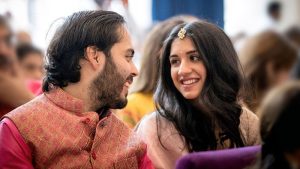 MUMBAI: MUMBAI: Reliance Industries (RIL) Chairman Mukesh Ambani’s son Anant Ambani today got engaged to Radhika Merchant. The couple had a traditional roka ceremony at the Shrinathji Temple in Rajasthan’s Nathdwara.
Anant Ambani, son of Mukesh Ambani and Nita Ambani, became engaged to Radhika Merchant, the daughter of Viren Merchant and Shaila Merchant, at the Shrinathji Temple in Nathdwara, Rajasthan.
The “Roka” (engagement) ceremony of Radhika Merchant, daughter of Shaila and Viren Merchant and Anant Ambani, son of Nita and Mukesh Ambani was performed at the Shrinathji Temple at NathDwara in Rajasthan today in the presence of family members and friends and blessed by the priests of the temple.
The young couple spent the day at the temple seeking Lord Shrinathji’s blessings for their upcoming union and participated in the traditional Raj-bhog-shringaar ceremonies at the temple. The family and friends will together celebrate the happy occasion later today.
Director-Corporate Affairs, Reliance Industries Limited, Parimal Nathwani, took to Twitter to congratulate the couple.Heartiest congratulations to dearest Anant and Radhika for their Roka ceremony at the Shrinathji temple in Nathdwara. May Lord Shrinath ji’s blessings be with you always. In June, Mukesh Ambani and his wife Nita Ambani hosted the arangetram ceremony of Radhika Merchant at the Jio World Centre in Mumbai.
Anant and Radhika have known each other for a few years and today’s ceremony commences the formal journey of their marriage in the coming months. Both families seek the blessings and good wishes of everyone for Radhika and Anant as they start their journey of togetherness.

Anant completed his studies from Brown University in the USA and has since served at Reliance industries in various capacities including as a member on the Boards of Jio Platforms and Reliance Retail Ventures. He currently leads the energy business of RIL. Radhika is a graduate of New York University and serves as a Director on the Board of Encore Healthcare.
(Bureau Report with Media Inputs).