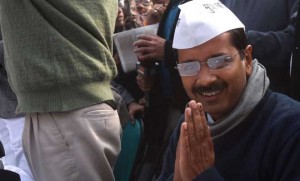 Following a meeting of the Delhi Cabinet, Kejriwal announced the government would provide a 50 per cent subsidy on power consumption up to 400 units a month.

“As promised the AAP government has slashed 50 per cent of the rates by giving a subsidy on the tariff. This will impact at least 28 lakh households in Delhi. Economically weaker sections of society will benefit from this decision,” Kejriwal said.

The subsidy is expected to cost the state Rs 200 crore per quarter until the end of the financial year in March. However, Kejriwal said it would cost Rs 61 crore.

“Rs 61 crore will be given to Tata Power Delhi Distribution Limited. But the remaining Rs 139 crore approximately will be given to government companies that are providing services and supply power to BSES Yamuna Private Limited and BSES Rajdhani Private Limited. And it will be adjusted from the accounts of BSES companies as they are yet to pay dues worth Rs 4,500 crore,” the new chief minister said.

Asked whether the government could give a subsidy when a regulator is in place, Kejriwal said: “The government has powers to give subsidy.”

Both discoms refused to comment on the subsidy when reached for their view.

Kejriwal also announced a CAG audit into the finances of the three private power distribution companies. “The discoms have 24 hours to submit their objections on government views on the proposal for audit of their finances,” he said.

Kejriwal met CAG officials before chairing the Cabinet meeting and said the government auditor had in principle agreed to conduct the audit.

“The previous government was spreading lies that audit cannot be done when a case has been pending in the high court. Now that I have had talks with the CAG, it has come to light that there is no stay on auditing these companies’ finances,” Kejriwal said.A CAG spokesperson said the audit agency had in principle agreed to do the audit but it had to be routed through Lieutenant-Governor Najeeb Jung’s office. “Private companies are not audited by the CAG but there are provisions under which we can, if a request comes through the governor or President’s office,” the spokesperson said.BJP leader Harsh Vardhan said Kejriwal was indulging in “populism” through the power subsidy and it would be implemented at the cost of welfare projects.

“It is populism. I would have appreciated it if they had actually fulfilled their promises in totality. They had promised a 50 per cent reduction in power tariff for all citizens of Delhi and now we see that it is only for those using up to 400 units. These subsidies are basically given from the government treasury and this is money we give to the government for the development of various projects,” Vardhan said.

The Congress, which has pledged outside support to the minority AAP government, maintained the subsidy was a good decision. “On the face of it, the decisions on water and power seem to be good for the people. But whether or not this will actually benefit society at large or only a fraction of it will be seen in a few months,” said Shakeel Ahmed, the AICC general secretary in charge of Delhi.