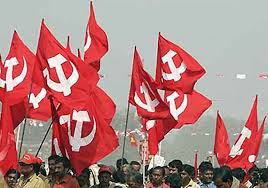 KOLKATA: Even as `dissipating CPI(M) in electoral terms’ scored a high point at Brigade Ground today with a massive gathering, party general secretary Prakash Karat’s call for why a third front and attacks on `Narendra Modi-Mamata Banerjee nexus’ and on Congress paled out with other Left leaders raising their voice on local issues and more attacks on Trinamool Congress’ “misrule in Bengal.’’ Karat and former West Bengal chief minister Buddhadeb Bhattacharjee during their speech while attacking BJP and Narendra Modi as a “communal and promoters of corporate, and the Congress as politically ailing in moral terms,’’ explained the need for a Third Front taking over in Delhi. “We want a front which takes care of common man of India in every sense of the term both economic and political will to have pro-people policies,’’ said party general secretary Karat. And Bhattacharjee echoed Karat when he said: “We want a government that takes care of economic capacity of common man before taking any policy decision which Congress-led UPA II doesn’t,’’ adding, “a government should introduce ration cards for all not BPL or APL, for peasants, labourers and middle-class tortured by a gloomy price situation.’’ But soon, speeches of state CPI(M) leaders, like Biman Basu, RSP leader K Goswami focused audience’s attention to “corruption and despotism, growing rapes and molestations in rural and urban areas and Mamata Banerjee’s total failure to arrest these trends,’’ gained more acceptance with other speakers. Basu said: “Corrupt leader Banerjee had spent crores of rupees to buy votes and MLAs to win fourth Rajya Sabha seat yesterday by engineering defection.’’ “Bengal never had this tradition until yesterday when Banerjee purchased three Left Front MLAs and three from Congress, and they still call her honest!” Later, Buddhadeb backed Basu and Goswami, “they (TMC) are spending money to paint everything as fine when it isn’t. They have tainted Chit Fund firms to help them out financially.’’ However, political observers here feel there wasn’t any surprise in what Left, including Karat, said: “There isn’t anything unexpected, excepting the massive rally which came as surprise though we do not know if that would reflect in votes when Bengal goes to LS polls a few months later.’’ But if massive gathering is any political indicator, then CPI(M) passed out today gracefully after TMC’s and Modi’s within last 10 days.