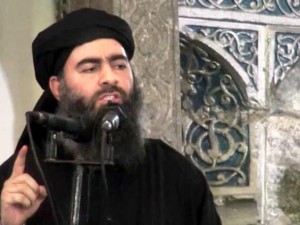 BEIRUT :The leader of the Islamic State, Abu Bakr al-Baghdadi, has been seriously wounded in an air strike in western Iraq, sources have told the Guardian.
A source in Iraq with connections to the terror group revealed that Baghdadi suffered serious injuries during an attack by the U.S.-led coalition in March. The source said Baghdadi’s wounds were at first life-threatening, but he has since made a slow recovery. He has not, however, resumed day-to-day control of the organisation.
Baghdadi’s wounding led to urgent meetings of IS leaders, who initially believed he would die and made plans to name a new leader.
Two separate officials — a western diplomat and an Iraqi adviser — separately confirmed the strike took place on March 18, 2015 in the al-Baaj a district of Nineveh, close to the Syrian border. There had been two previous reports in November and December of Baghdadi being wounded, though neither was accurate.
The diplomat confirmed an air strike on a three-car convoy had taken place on that date between the village of Umm al-Rous and al-Qaraan. The attack targeted local IS leaders and is believed to have killed three men. Officials did not know at the time that Baghdadi was in one of the cars.
Hisham al-Hashimi, an Iraqi official who advises Baghdad on IS, told the Guardian: “Yes, he was wounded in al-Baaj near the village of Umm al-Rous on March 18 with a group that was with him.” Baghdadi is understood to have been spending much of his time in al-Baaj, about 320 km west of the IS stronghold of Mosul.

“He chose this area because he knew from the war that the Americans did not have much cover there,” said a source privy to some of Baghdadi’s movements. From 2003 (the U.S. military) barely had a presence there.
It was the one part of Iraq that they hadn’t mapped out.” Al-Baaj, a Sunni tribal area, has long remained outside of state control even under ousted Iraqi leader Saddam Hussein’s regime, and was considered a safe haven for jihadists from 2004 onwards.

Residents have long used smuggling networks as well as small valleys and tracks to import goods from nearby Syria and to other parts of Sunni areas of Iraq in Nineveh and Anbar. Al-Qaeda in Iraq and all its subsequent incarnations, including IS, had largely unfettered access to the routes until al-Baaj became a focus of U.S. surveillance earlier this year.
Baghdadi had at least one earlier brush with death when U.S. jets attacked a two-car convoy on the outskirts of Mosul on December 14, 2014. His close aide Auf Abdul Rahman al-Efery was killed when a rocket fired from a war plane hit one of the cars. Baghdadi was believed to be in the second car, which was not hit.
In recent months, air strikes have been increasingly effective in targeting the IS leadership. Baghdadi’s deputy, Abu Muslim al-Turkmani, and the head of the group’s military operations in Iraq were both killed in early December.
After seizing control of a large chunk of Iraq and Syria last June, and threatening Baghdad and Irbil, IS has recently lost substantial ground in both countries. An offensive led by Shia militias and the Iraqi military took back Iraq’s fourth city, Tikrit last month, as well as close to 7,000 sq. km in the centre of the country.
A Kurdish push from the north in January reclaimed close to 20,000 sq. km. Both offensives appear to be paving the way for an assault in Mosul, which is not expected before the autumn. IS remains in full control of Mosul, as well as Anbar Province and much of eastern Syria.
The border between the two countries is largely redundant and, despite air strikes, the group remains in control of six crossing points that allow a ready flow of funds, fighters and weapons. Baghdadi had declared the swath of land from eastern Aleppo to central Iraq to be part of a Caliphate that he leads.
While Baghdadi invokes authority as a religious leader, the constant threat from the skies has led to some of its command and strategic decisions being made by other member of the leadership. Since Baghdadi’s wounding, IS’ military and Shura councils have become increasingly prominent in decision-making, the source close to the organisation revealed.