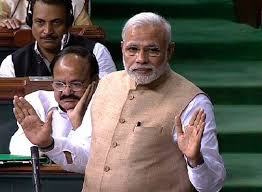 NEW DELHI: Prime Minister Narendra Modi on Thursday addressed the Lok Sabha, replying to the Motion of Thanks to the President’s address.
Earlier, the Congress moved adjournment motions in both Houses of Parliament over the Tamil Nadu Government’s letter to the Centre seeking its views on the decision to free the seven convicts in the Rajiv Gandhi assassination case.
Amid protests, Parliamentary Affairs Minister M. Venkaiah Naidu said the issue could be taken up after the question hour.Speaker Sumitra Mahajan allowed Congress leader Mallikarjun Kharge to speak on the issue briefly during the question hour.
Mr. Kharge termed the Tamil Nadu government’s decision “very unfortunate”.
A Bill to provide Aadhaar statutory backing for use for transferring government subsidies and benefits was introduced in Lok Sabha today, incorporating clauses to keep personal information discreet and it not being a proof of citizenship.
Finance Minister Arun Jaitley introduced ‘The Aadhaar (Target Delivery of Financial and Other Subsidies, Benefits and Services) Bill, 2016’ amid protests by Congress over the legislation being categorised as a money bill which does not need approval of the Rajya Sabha.
Taking a dig at the Opposition for linking Adani group with the government, Union Minister Nitin Gadkari today said state-owned Kandla port was more efficient than Adani’s Mundra port, both of which are in Gujarat.
Gadkari’s remarks came during Question Hour in response to TMC member Saugata Roy who mentioned the name of the Adani group when the Minister was replying to supplementaries relating to ports.

Congress Vice President Rahul Gandhi demanded the rolling back of the proposal for taxing EPF withdrawal. He said, “EPF is the safety net of the employees and imposing a tax on this is wrong. I will urge the Prime Minister to announce… that the tax will be rolled back.”

Government said it is examining the Tamil Nadu government’s decision to remit the sentence of seven convicts in the Rajiv Gandhi assassination case but made it clear that abiding by Supreme Court’s order on the issue is its Constitutional responsibility.

“We have received a letter from the Tamil Nadu government yesterday and we are examining it. But I want to state about the accused that Supreme Court has given a verdict and to abide by its order is our constitutional responsibility, not only constitutional but also moral responsibility,” Home Minister Rajnath Singh said in Lok Sabha during Zero Hour.