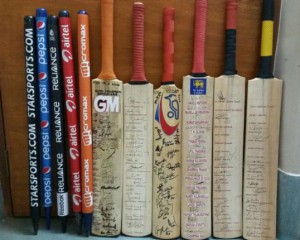 BANGLURU: This 18-year-old has a passion for collecting autographs of cricketers.Pranav Jain’s tryst with philography began in 2007 during the Indo-Pak series where he was able to get autographs from both the teams along with umpteen jerseys and other memorabilia. Inspired, he decided to take his hobby seriously.

“The IPL began in 2008, opening up opportunities for me as I could approach and gain autographs from players, retired players, umpires and coaches of different countries. Friends in other States would take autographs on my behest and courier them over,” he says.
The biggest moment presented itself in 2009 when Pranav was able to meet Sachin Tendulkar. “The 10 minutes I spent with Sachin will be the longest ever,” he recounts.The collection kept increasing with every passing year and currently includes more than 350 signed mini-bats, 70 jerseys and caps, 20 player biographies, 10 bats signed by full teams from different countries including India, Pakistan, South Africa and Australia, coupled with uncountable posters and match tickets.
Pranav is now resolved to get the autograph of every player who has played an international match in any form of the game for India.“I am already done with Karnataka, Kerala and Tamil Nadu and am currently devising ways to find out long-forgotten players and take their autographs,” he says.