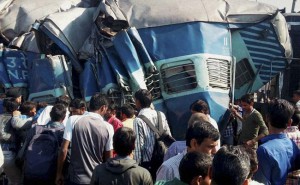 LUCKNOW: Thirty two people have died and over 50 were injured as two coaches of the Dehradun-Varanasi Janta Express derailed in Uttar Pradesh’s Rae Bareli district.The accident took place around 9.10 on Friday morning as the train was coming to a stop at the Bachhrawan railway station – 30 km from Rae Bareli.
It was likely that there was a brake failure, news agency ANI quoted railway sources as saying. The engine overshot the signal, two compartments were derailed.
One of the coaches, which was a general compartment, has been crushed by the impact — the rescue work took around 6 hours. The other was a guard compartment which is likely to have been vacant. If not for the vacant coach, the number of casualties would have been higher, officials told.
In a series of tweets, Railway Minister Suresh Prabhu said Railways has been prioritising safety as a “thrust area”. An inquiry has been ordered into the incident, he also said.Gas cutters were used to get the injured people out of the mangled compartments. A team of doctors from Lucknow’s King George Medical University have been sent to the spot to treat the injured.
News Agency Indo-Asian News Service reported that there was some disturbance in the area — furious locals raised slogans against the administration and railway authorities, saying the rescuers took a long time to reach the spot.An ex gratia of Rs. 2 lakh has been declared for the next of kin of the deceased, those injured will be given Rs. 50000.
The accident has disrupted train services in the New Delhi-Lucknow-Varanasi sector.