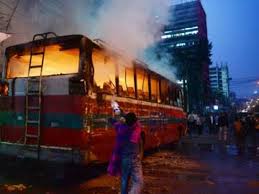 DHAKA/ NEW DELHI  : India is bracing for a major diplomatic challenge over Bangladesh in the days ahead with New Delhi deciding to take the lead in securing as much support for the Sheikh Hasina government after the elections on Sunday.
Many Bangladeshis stayed away from polling stations in Sunday’s general elections, marred by an opposition boycott and relentless violence that threatens to deepen the crisis in the South Asian nation. Prime Minister Sheikh Hasina’s refusal to heed opposition demands to step down and appoint a neutral caretaker to oversee the election led to the boycott, undermining the legitimacy of the vote. Opposition activists responded with attacks, strikes and transportation blockades in unrest that killed at least 275 people in 2013.
“We never expected such an election. For such a situation both the government and opposition are responsible. They don’t want to establish democracy,” said Aminul Islam, a Dhaka resident who refused to vote.
Police opened fire to stop protesters from seizing a polling center in northern Rangpur district, killing two people. In a similar incident in neighboring Nilphamari district, police fired into about two dozens of protesters, leaving one person dead.Police gave no further details, but Dhaka’s Daily Star newspaper said the three men belonged to the opposition Jamaat—e—Islami party.
Elsewhere, police said suspected opposition activists stabbed to death a polling official, and local media reported that attackers torched more than 127 school buildings across the country in overnight attacks. The buildings were to be used as polling stations.The voting began at 8 a.m. but local television stations showed mostly empty polling stations, still wrapped in early morning winter fog.
By midmorning, polling was suspended in at least 120 centers because of attacks, burning of ballots and election materials, an election official said on condition of anonymity as he was not allowed to speak to reporters. At a polling station in Dhaka’s Mirpur district, only 25 out of 24,000 registered voters cast their ballot in the first two hours, with polling officials saying fear of violence and absence of any strong opposition kept people away.
Bangladesh has a grim history of political violence, including the assassinations of two presidents and 19 failed coup attempts since its independence from Pakistan in 1971. 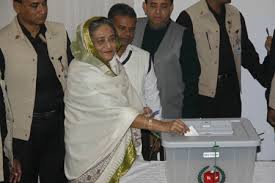 “I am fearful that deadly violence could return, people would continue to suffer, political forces with extreme views could emerge in the face of government crackdown and repressive measures,” said Asif Nazrul, a law teacher and analyst. “This election will just pollute our very new democracy by shrinking the space for opposite views.”
The squabbling between Hasina and opposition leader Khaleda Zia known as the “Battling Begums” has become a bitter sideshow as both women, who have dominated Bangladeshi politics for two decades, vie to lead the country.
Zia urged people to boycott what she called “farcical” elections. “None at home and abroad will legitimize it,” she said. The bickering between the two longtime rivals caused an uproar in October, when the women spoke for the first time in years in an acrimonious telephone call. “I called you around noon. You didn’t pick up,” Hasina said, according to a transcript published in the Dhaka Tribune. Zia, leader of the Bangladesh Nationalist Party, said the prime minister was wrong.“You have to listen to me first,” Zia snapped. 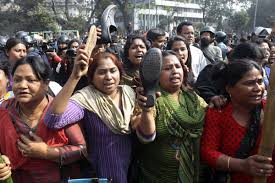 Last weekend, after authorities barred Zia from leaving her home to join a rally, she told police that she would change the name of Gopalganj, Hasina’s home district, if she came to power. Her outburst was broadcast live on TV while roads around her home were heavily guarded and sand—laden trucks were parked to obstruct her movement.
A key factor in the latest dispute is the role of Jamaat—e—Islami, the country’s largest Islamic political party. The party is a key ally of Zia, and was a coalition partner in the government Zia led from 2001 to 2006.
Opponents of Jamaat—e—Islami say it is a fundamentalist group with no place in a secular country. Bangladesh is predominantly Muslim, but is governed by largely secular laws based on British common law.
The execution last month of Abdul Quader Mollah, a Jamaat—e—Islami leader and a key member of the opposition, exposed the country’s seething tensions.
Mollah was the first person to be hanged for war crimes in Bangladesh under an international tribunal established in 2010 to investigate atrocities stemming from the 1971 war of independence against Pakistan. Bangladesh says Pakistani soldiers, aided by local collaborators including Mollah, killed at least 3 million people and raped 200,000 women during the nine—month war. The case remains politically volatile because most of those being tried are connected to the opposition.The Hindu>