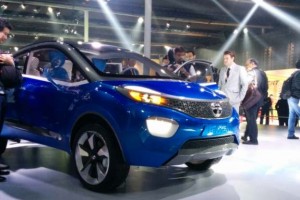 NEW DELHI : Tata Motors today unveiled the ‘Jump’, aka Nexon compact SUV, at the 2014 Indian Auto Expo. The new Nexon SUV is built on the same X1 platform on which Vista and the new Falcon family cars are being developed.
The new Tata Nexon derives power from a new 1.2-litre turbo petrol unit, called the ‘Revotron’ engine that delivers a peak power output of 83bhp with 140Nm of torque. Tata might introduce a new 2.2-litre DICOR Safari Strome’s diesel engine-inspired powertrain, which will be developed at the company’s own facility.
The new Jump compact SUV will be Tata Motors’ answer to the Ford EcoSport, Renault Duster and likes. The car is likely to be showcased at the upcoming international Geneva Motor Show as well in March 2014.