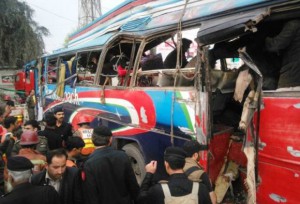 PESHAWAR: At least 16 people, including three women, were killed and over 30 others injured today when a powerful bomb ripped through a bus carrying government employees in this restive northwestern Pakistani city.
The blast took place as a bomb placed inside the bus exploded when the vehicle packed with government employees reached Peshawar from Mardan.The bomb exploded when the private bus was on Sunehri Masjid Road as it was taking civil secretariat employees for duty.
At least 16 people, including three women, were killed in the blast targeting the bus carrying government officials, SSP operations Peshawar Abbas Majeed Marwat said.
He said about 50 people were on board the bus at the time of the explosion. Over 30 people were injured in the blast.explosive device (IED) planted inside the bus. About 8 kg of explosives were used in blast.
The injured were shifted to Lady reading hospital. The condition of a majority of those injured was stated to be critical. Eight of the injured were admitted in ICU.The security forces and police cordoned off the entire area and started a search operation.

Fear and panic spread among residents in the wake of the explosion.
No group has claimed responsibility for the attack.”The top part of the bus has blown off and is being cut to pull out the injured,” an eye witness was quoted as saying by The Express Tribune.

Peshawar has seen scores of attacks on civilians as well as law enforcement personnel in the past.The city is also the home to the XI Corps, an administrative corp of the Pakistan Army, which manages all military activity in Khyber Pakhtunkhwa and is currently engaged in a full-blown operation against militants in North Waziristan.
Prime Minister Nawaz Sharif strongly condemned the attack in Peshawar. He expressed grief over the loss of precious lives in the attack.”These cowardly attacks cannot shatter our unflinching resolve against terrorism,” Sharif said.
Pakistan Army launched its offensive in the region in 2014 in a bid to wipe out militant bases.
Attacks have fallen since the government crackdown after the 2014 Army Public School attack and the Taliban have been squeezed into small pockets of territory.However, militant groups remain able to launch sporadic attacks on security forces and civilian targets.

Last week,  17 people were killed and 31 others injured when a suicide bomber blew himself up in a crowded court in Shabqadar Bazaar of Charsadda district near here, an attack the Taliban termed as revenge for the execution of liberal Punjab province governor Salman Taseer’s Islamist assassin.