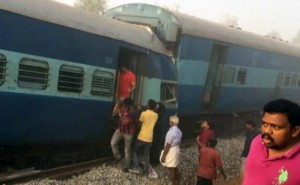 HOSUR:  Ten passengers died and over 100 were injured after nine bogies of the Bangalore-Ernakulam Intercity Express derailed this morning near the border between Tamil Nadu and Karnataka.
The train had left Bengaluru at 6.15 am and it got derailed at 7.35 am between Anekal Road and Hosur on Bangalore City-Salem Section, about 45 km from Bengaluru, Railways said.
The accident occurred after the train hit a boulder that had fallen on the track, tweeted Union Railway Minister Suresh Prabhu.
“I am on way to Bangalore to visit the accident site to help all stranded. All possible help will be rendered to the families affected,” he added.
Mr Prabhu said he has directed all senior officers to rush to the spot with help. Law Minister Sadananda Gowda has also reached the accident site.An inquiry had been ordered to fix responsibility and for corrective action to prevent such unfortunate accidents, said the Railway Minister.
Relief and rescue operations are going on at the site, with medical teams from both Karnataka and Tamil Nadu on the spot. Police and Railway officials said efforts were being made to reach those trapped inside the derailed bogies.
The injured have been rushed to hospitals in nearby Hosur and Bengaluru, they said.In a tweet, PM Modi said he was, “Saddened by the loss of lives due to derailing of Bangalore-Ernakulam express. Condolences to the families of the deceased”.
Help desks have been set up at the Bangalore City Railway Station and at the accident site.Bengaluru city help desk numbers are 080 22371166, 080-22156553, 080-22156554, 9731666751.