NEW DELHI : A AP’s Gurgaon candidate Yogendra Yadav has been found guilty of violating the model poll code by distributing a newspaper, which has been categorised as “paid news”, and hence its cost will be added to his election expenditure, an official said Friday.The district media certification and monitoring committee (MCMC) found the publishing and distribution of a tabloid newspaper named “Aap Ki Kranti” by the workers and supporters of Aam Aadmi Party without proper registration a violation of the Model Code of Conduct 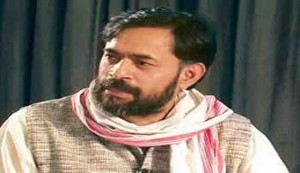 In addition, the committee has recommended action as per law for distribution of an unregistered newspaper.“As per section 15 of Press and Registration of Books Act 1867, any person who prints or publishes a newspaper without confirming to the rules may be punished with fine not exceeding Rs. 2,000 or imprisonment for a term not exceeding 6 months or both,” the official said.
As far as the expenditure of the newspaper, the MCMC committee has decided to take cost at market rate and estimated a rate of Rs.3 per copy. For 50,000 copies, the total cost comes out to be Rs.150,000 which has been decided to be added to Yadav’s election expenditure.The officials have put the publishing and distribution of a newspaper in the category of “paid news”.
AAP supporters were found distributing – at various places in Gurgaon city and Mewat district – this “newspaper” which had a survey showing AAP leading over other parties as well as other content in favour of AAP candidates.Interviews of party chief Arvind Kejriwal and Yogendra Yadav were also published.A notice was served to Yadav by the district MCMC April 7, and a reply sought within 48 hours. Replying on April 9, Yadav contended that “Aap Ki Kranti” is not a newspaper and it is only a pamphlet which was published for distribution among party workers and not amongst the public. However, this failed to convince the committee.