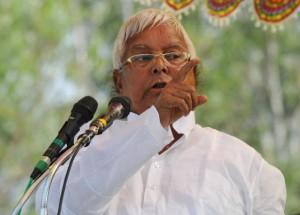 MADHEPURA: “2014 Lok Sabha poll mein Lalu Prasad pasht ho gaye, is baar nahi jityaye to asht ho jayenge [In the 2014 Lok Sabha poll Lalu Prasad was defeated and down, if in this election we do not vote for him he will be out],” is the clarion call of the Yadavs of Madhepura, which for ages, has been identified with an oft-repeated adage Rome Pope ka, Madhepura Gope ka (Rome is of Pope, Madhepura is of Gope [Yadavs]).”
In the 2014 Lok Sabha poll, JD(U) candidate Sharad Yadav was defeated by then RJD candidate Pappu Yadav from Madhepura. But a year after, in this Assembly poll the expelled RJD MP, Mr. Pappu Yadav, appeared to be not a “factor” for the Yadavs here. “He has defied and defected from our leader Lalu Prasad…he is not a factor at all for us,” Sarjug Yadav of Singheshwar told The Hindu.

Madhepura has been represented in Parliament by Mr. Prasad until he was defeated by Mr. Sharad Yadav in 2009. The caste composition of the district showed complete dominance of Yadavs as they constitute 40-45 per cent of the total voters, followed by 25-30 per cent Rajputs and 10-15 per cent extremely backward castes like Kewats, Gangotas, Kodhi, Bind and Suris.
Besides, it has 6-7 per cent Muslim voters, especially in the Assembly segment.
Madhepura has four Assembly constituencies: Alamnagar, Bihariganj, Singheshwar (reserved for Scheduled Caste) and Madhepura. In all the seats the grand alliance candidates seem to be in a comfortable position.
Significantly, in the 2014 Lok Sabha poll the BJP made a dent in the Yadav vote bank, as the youth of the community voted for Narendra Modi. However, the crushing defeat of Mr. Prasad has seemingly swung the sentiment in his favour and led to the consolidation of voters behind him in this Assembly election.
They also explained the simple poll arithmetic for the likely smooth passage of the grand alliance candidates. “Yadavs plus EBC and Muslims become a big winning formula for any candidate in Madhepura,” said Manoj Yadav.
Both Mr. Prasad and Nitish Kumar have been making a whirlwind campaign here to ensure a 100 per cent win.