PERTH:Defending champions India on Friday survived a scare before defeating a spirited West Indies by four wickets in a group league encounter to romp into the quarter-finals of the ICC Cricket World Cup here with four wins on the trot.
Chasing a modest target of 183, India’s top-order struggled due to poor shot selection before skipper Mahendra Singh Dhoni’s composed unbeaten innings of 45 helped them reach the target in 39.1 overs and ensure their fourth consecutive win in the tournament. 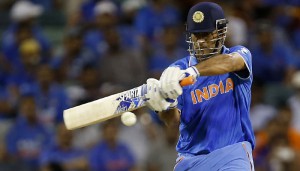 However, it wasn’t as commanding as the previous three wins as the batting was scrappy, the fielding shoddy with as many as four catches being dropped and the bowling lacking discipline at times with 16 wides during the West Indies innings.
By virtue of this victory, India stretched their winning run at the global event to eight matches stretching from 2011 edition’s group league match against West Indies in Chennai.The eight wins thus equals the record of Sourav Ganguly-led team’s effort during the 2003 edition in South Africa.
Dhoni, who had a poor run of form in recent times played an innings of substance that had three boundaries and a six off 56 deliveries. West Indies pacers’ 19 wides also helped India’s cause after a wobbly start got them off track.
The Indian batting was put to test for the first time in the tournament even though it was a smallish target. The pace and bounce of the WACA strip did play its part but more importantly, the shot selection of the batsmen was pretty poor.
India got off to a disastrous start as they lost both the openers cheaply and the middle order batsmen never really looked comfortable at the crease.
Shikhar Dhawan (9) again went for a Jerome Taylor delivery outside the off-stump which was not of drivable length and was caught by Darren Sammy at second slip.Rohit Sharma (7) got fuller delivery from Taylor and the outside edge was taken by wicketkeeper Denesh Ramdin.
Virat Kohli (33, 5×4) played some crisp on drives as well as a lovely cover drive adding 43 runs for the third wicket with Ajinkya Rahane (14).Till the time Kohli was at the crease, he looked compact most of the times although there were a few good deliveries from both Taylor and Kemar Roach which had him in some sort of bother.

But it was a well disguised short ball from Andre Russell that brought about his end going for an ugly-looking pull-shot. He was off balance and also eyes were not on the ball as it went straight to the fielder at deep fine leg.

Kohli’s departure at the end of 15th over created more pressure on Rahane, who was completely out of sorts as he even failed to cash in on free-hits.
He was finally out fishing a Roach delivery to Ramdin behind the stumps. He asked for a ‘review’ but umpire Nigel Llong’s decision was upheld and his miserable stay of 34 balls ended.
Suresh Raina (22) and skipper Dhoni, the two most capped ODI players in this team got together and looked like getting things back on track when Raina flashed at a rising delivery from Dwayne Smith to give Ramdin his third catch of the day.

Ravindra Jadeja’s discomfort against fast and rising deliveries is well known and it wasn’t any better on the day as he also fell prey to the pull-shot being caught in the deep.

Dhoni played a patient knock and was ready to wait for the loose deliveries as he knew that the target was always in reach. He ran well between the wickets and got a six when he slashed hard at Russell delivery. With Ravichandran Ashwin for company, the invaluable 51 runs added for the seventh wicket sealed the match in favour of India.
Earlier, Indian bowling unit again showed consistency as they bundled out West Indies for a paltry 182 in 44.2 overs.A fit-again Mohammed Shami (3/35 in 8 overs), coming back after a match’s rest, was the best of the lot as he troubled the batsman with both pace and bounce.
He bowled a deadly first-spell where he took both Dwayne Smith and Chris Gayle out of the equation, to seize the momentum in favour of Mahendra Singh Dhoni and co.

He was complemented well by the quartet of Umesh Yadav (2/42 in 10 overs), Mohit Sharma (1/35), Ravichandran Ashwin (1/38) and Ravindra Jadeja (2/27) as West Indies looked no better than minnows UAE during the entire duration of their innings.
Young captain Jason Holder (57) did play his heart out as his gutsy half-century provided some respect to his team’s total. He added 51 runs for the ninth wicket with Jerome Taylor (11) as West Indies managed to cross the 175-run mark after being 124 for eight at one stage.
The way Indian team sorted Gayle (21) out was all about strategy and execution. Aided by the bounce, both Yadav and Shami mostly pitched it on good length as Gayle found it difficult to tee off in his customary stand and deliver style.

The extra bounce saw a couple of slashes go towards third man but fielders couldn’t complete the catches. He played and missed a few. It took him 18 balls to hit his first four over over mid-off when Yadav bowled in the slot. He also hit Shami over mid-on while pulling Yadav over deep mid-wicket for a six.
Having lost his opening partner Smith (6) and Marlon Samuels (2), Gayle showed some urgency but struggled big time.
At this point of time, Dhoni removed his deep fine leg fielder and made it stand at deep square leg. The move paid dividends as there was an intriguing battle going on between Gayle and Shami. Shami bowled one short of length which kicked up and Gayle top edged a pull shot which exactly went to Mohit Sharma placed specifically for that catch.
Before Gayle became the third victim, Smith (6) was done in by that extra bounce that Shami generated with practically no room to play the square cut. The resultant edge went to Dhoni as a regulation catch.
Samuels (2) was run-out when he misjudged a single after Gayle’s mistimed pull-shot fell just short of a diving Mohit Sharma running forward from his mid-wicket position. By the time Gayle refused the single, Samuels had nearly come upto him and there was no way that he could have made it back.
Denesh Ramdin was the fourth wicket to fall as Yadav bowled a fullish delivery and the keeper-batsman went for an expansive drive only to be played on. With 35 for four at the start of the 10th over, there was no chance for a West Indies revival after that.

Slightly built left-hander Jonathan Carter (21) had a 32-run stand for the fifth wicket with Lendl Simmons (9) in which the former was the dominant partner.
Simmons became Mohit’s first victim when his hook shot landed straight at Umesh Yadav’s throat at the deep fine leg boundary as West Indies were 67 for five.
While facing Ashwin, Carter was repeatedly trying to play the slog sweep without taking the bounce into account. He misread the bounce and paid price for it as his top-edged sweep was easily taken by Shami at deep fine leg boundary to make 71 for six.
Andre Russell (8) hit Mohit for a six but then tried to hoick Ravindra Jadeja over deep mid-wicket to be taken by Virat Kohli running forward from his position at long-off boundary. At the halfway stage, West Indies were down in the dumps at 88 for seven.pti.