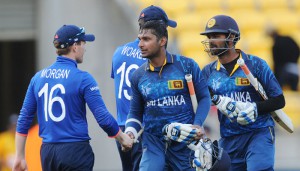 WELLINGTON:Kumar Sangakkara and Lahiru Thirimanne struck fluent centuries to help Sri Lanka outplay a hapless England by 9 wickets in a pool A ODI match of the cricket World Cup, here on Sunday.
Chasing 309 for a win at the Westpac Stadium, Sri Lanka looked comfortable from the very start after a 100-run opening partnership and then Thirimanne (139 not out) and Sangakkara (117 not out) managed an unbeaten 212-run stand to help the islanders canter to their target in 47.2 overs.
The duo combined well to make the James Anderson-led bowling attack not only look ordinary but also put up a commanding batting display in their record second-wicket partnership against England in ODIs. Opener Tillakaratne Dilshan (44) was the only casualty in an otherwise supreme batting show — off-spinner Moeen Ali being the beneficiary of the lone wicket to fall.
The 25-year-old Thirimanne, who was dropped on 3 off Stuart Broad in the 4th over of the innings, capitalised on the spill to become the youngest Sri Lankan to score a century in a World Cup.

His 143-ball knock was studded with 13 fours and 2 sixes – hit the winning six. Sangakkara showed his class once again to register a chanceless 23rd ODI hundred, his 86-ball knock laced with 11 fours and 2 sixes.
Sri Lanka though were guilty of dropping more than a couple of catches in the England innings but their effort with the bat put a curtain on all the shortcomings. Earlier electing to bat, England rode on Joe Root’s 121 to post 309 for six in 50 overs and a quickfire 19-ball unbeaten 39 from Jos Buttler in the end raised English hopes of a good showing.
England vs Sri Lanka But that was not to be as Sri Lanka looked unfazed after what looked an ordinary bowling effort, to make the chase look simple and register their third win of the tournament. After losing their opener against New Zealand, the Angelo Mathews-led side side has certainly done well to post three wins on a trot, against Afghanistan, Bangladesh and now England.

The Eoin Morgan-led side on its part is struggling with just a single win from four matches and that too has come against minnows Scotland. Batting first, England were in a bit of trouble at 161 for four before a 98-run partnership between Root, whose 108-ball stay was laced with 14 fours and 2 sixes, and James Taylor (25) put the innings back on course to a big total.
The defiant stand, which is a record 5th wicket partnership for England in World Cup matches, came in just 11 overs as the Sri Lankan bowlers had little answer to the brisk run-scoring. In the end though it was Buttler’s cameo that really pushed the England total beyond the 300 plus mark.
England started off well with Ali (15) and Ian Bell (49) sticking it out in the first 9 overs. Fielding was a big let down by the islanders, as Bell was dropped in the fourth over twice and later Root was also given a life when he was in single digits. Medium-pacer Mathews (1-43) drew first flood after picking up Ali and off-spinner Tilakaratne Dilshan (1-29) soon scalped Gary Ballance (6) with a caught and bowled effort.
Bell hung around for a while only to see new-ball bowler Suranga Lakmal (1-71) deny the opener his fifty. Morgan (49) also stuck around for sometime but Thisara Perera (1-55) got his prized wicket an over before the start of the powerplays in the 35th over.

After that it was a Root-Taylor show as the duo combined the right dose of caution and aggression to not only see England out of trouble but also took the attack to the opposition. Root, who struck his 4th ODI ton in 52 matches, was severe on Perera in the 45th over as he smashed a six and three fours after Taylor’s opening six to fetch 25 runs from six balls.
Taylor got out to Lasith Malinga (1-63) after his 26-ball cameo and Root was trapped LBW off left-arm spinner Rangana Herath (1-35) but only after the duo had done sufficient damage. The final five overs gave England 52 runs and the last over 22 as Buttler smashed 6 fours and a six to finish off with a flourish.