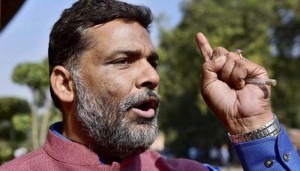 PATNA: No government will be formed in Bihar without the support of Third Front, says controversial Madhepura MP Pappu Yadav stressing that the the other two alliances are unlikely to get majority in the Assembly polls.
An uncanny politician, who has swiftly risen in the ranks in last 15 years while frequently changing goal posts, Rajesh Ranjan alias Pappu Yadav, who parted ways with RJD Chief Lalu Prasad ahead of assembly election, is leading Rashtriya Janadhikar Party which is contesting as part of a Third Front.
He believes that neither NDA nor the grand alliance will get a clear majority and hopes to push his case for the top job in the state in such a scenario.
Claiming that only he can “bring a smile” on the face of the poor and the youth, he goes on to say that either of the alliances should support him to form the next government.
“People of all castes are fed up with both of them the grand alliance and the BJP. There is no question of any of them getting a majority. Without Third Front’s support, no alliance will be able to form a government,” Yadav told PTI in an interview here.
He argues while there is “no wave” in favour of Narendra Modi in Bihar on which the state BJP was “solely banking”, the alliance of Nitish Kumar and Lalu Prasad is “not working”.
Addressing a gathering in Yadav-dominated Ghoshwari- Baijna area in Mokama, he says, “Without Pappu Yadav, nobody will be able to form a government. If that happens within one year I will change the life of people of the region.”
A fifth term MP, Pappu Yadav defeated JD-U President Sharad Yadav in 2014 Lok Sabha polls.He was earlier eyeing an alliance with BJP after being expelled from RJD, but finally joined a six-party alliance led by Samajwadi Party supremo Mulayam Singh Yadav to contest all the 243 assembly seats in Bihar.
However, NCP whose leader Tariq Anwar was declared its CM candidate walked out of it after Mulayam’s remarks suggesting that he wanted the BJP to come to power in Bihar.
He was elected to Lok Sabha thrice from Purnea and twice from Madehpura and it is said his writ ran large in Kosi-Seemanchal region.
Out of RJD, Pappu has been touring the state extensively trying to project himself as a leader of the youth particularly among the Yadavs and has been taking on his one time mentor Lalu in election meetings.
He changed political parties with alacrity in his his 15 years of political career, hopping from LJP to SP to RJD and now heading a new party.