Skip to the content
SANTANU BANERJEE
KOLKATA: A day after BJP president Rajnath Singh held out the olive branch to her, Trinamool Congress chief Mamata Banerjee Saturday ruled out any alliance with the right wing party.“Some parties want to incite riots in Bengal and divide people, based on religion and language. People of Uttar Pradesh and Bihar who live in Bengal are as much part of the state as any Bengali-speaking person. 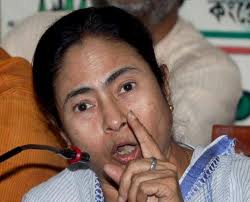 “We do not play politics of division. We care for people irrespective of their religion, caste or creed. We will never, ever have an alliance with the BJP,” Banerjee said while addressing a Lok Sabha election rally at Shyambazar in north Kolkata.
Speaking at a rally in Sreerampore in Hooghly district Sunday, Modi had alleged that Banerjee had no love for people from other states who have settled in Bengal, but “your face glows when people come from Bangladesh”.Repeating her charge that the Congress, the BJP and the CPI-M have formed a nexus in Bengal to fight the Trinamool, Banerjee accused the opposition of carrying out a malicious propaganda during the election campaign.
She attacked a section of the media also.
“Some media houses think they can control the government. We are the government of the people. People will control us. We cannot run the government and fix our political agenda based on the wishes of media houses.“Let the media houses pursuing political agenda fight elections and form a government,” she said.
In an indirect reference to the government drawing flak after the police summoned two Communist Party of India-Marxist (CPI-M) leaders in connection with the Saradha scam, she said: “Some people make baseless allegations and get media coverage.
“But if SIT (Special investigation Team formed to probe the Saradha muddle) takes action based on evidence, media cries foul.”CPI-M leader Gautam Deb got the summons from the police hours after he claimed that Banerjee’s family members have purchased properties worth about Rs.20 crore in recent years.Another CPI-M leader and Lok Sabha candidate from Jadavpur, Sujon Chakraborty, also received summons. However, both leaders declined to appear citing political commitments.