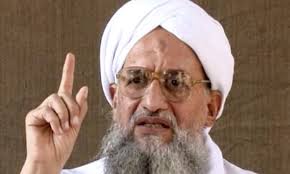 NEW DELHI : Pakistan-based Asim Umar, a top Al Qaeda operative, has been named to lead the Qaedat-al-Jihad, the new terror unit that Al Qaeda chief Ayman-al- Zawahri has announced will operate in the Indian sub-continent.
In recent months Umer has issued a series of statements encouraging Muslim youth to take to the path of Jihad and calling for the establishment of a caliphate or Islamic state in India and its neighbourhood, a theme that also resonates in Jihadi literature and propaganda used by the Pakistan-based terror groups Lashkar-e-Taiba and the Jaish-e-Mohammad. Except for one known attempt by the Al-Qaeda to extend its operations here, there are no known footprints of the terror group in India.

In 2008-09, a Yemeni terrorist had carried out a reconnaissance of Goa. This came to light when the terrorist was killed in Iraq and his computer was recovered by US security forces. Indian security agencies say the Al Qaeda’s attempt to expand its operations in the Indian sub continent is neither “unusual nor nor-unexpected.
” It has been marginalized in the Gulf with the Islamic state or ISIS making big inroads both physically and in drawing new recruits. According to a ”  senior official associated with counter-terrorism told “The Al Qaeda wants to be relevant and the Indian sub continent is the natural place for it to move into,”  The Indian security establishment has in its initial analysis of Zawahri’s announcement told the government that the Al Qaeda-led operations in India are likely to be handled by a splinter group of the Indian Mujihadeen or IM based in Pakistan.
Related Amit Shah Asks Partymen to Help in Jammu and Kashmir Rescue Operations Ayman al-Zawahri: Doctor, Teacher and Terror Mastermind The group, led by a man called Shiekh Armar from Hyderabad and another, Dr Shahnawaz, from Azamgarh in Uttar Pradesh, recently released a video which talked about men trained in Afghanistan fighting in India.
Yasin Bhatkal, the top IM commander arrested from the India-Nepal border last year has reportedly talked about the split in the IM during his interrogation. Security agencies now suspect that Pakistan’s ISI could be behind the split and behind the splinter group tying up with the Al Qaeda in Afghanistan. “The IM is an Indian group, its tie-up with the Al Qaeda shifts the focus away from the ISI,” a senior official said.