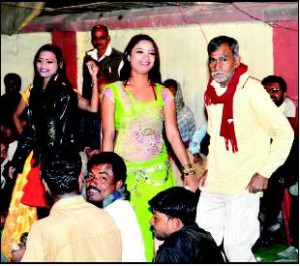 PATNA: In an embarrassment for the ruling Janata Dal (United) in Bihar, party MLA Shyam Bahadur Singh was caught on camera dancing with an alleged bar dancer at a function organised in his constituency Barharia in Siwan district.The video shows the JDU (MLA) not only dancing with the bar girl, but also indulging in vulgar acts.
Singh is not new to controversy. In 2012, the Barhariya MLA was caught on camera dancing with girls at a marriage function in Gopalganj district.A similar incident was caught on camera in 2010 showing Singh dancing with girls. The JD(U) MLA was shown on local TV channels gyrating with alleged bar girls and making gestures.Singh had then apologised for his action admitting it was a “mistake”.
The JD(U) high command had issued a warning to the minister, but it seems the party MLA is in no mood to adhere to such warnings and mend his ways.