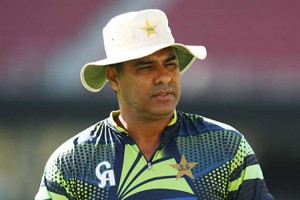 LAHORE: Pakistan cricket coach Waqar Younis has resigned weeks after his team’s humiliating exit from the World Twenty20 in the group stages.
The former captain yesterday said the Pakistan Cricket Board’s failure to implement his recommendations after the 2015 World Cup and the leak of his confidential report after the team’s disastrous run at the World T20 played a big role in him walking away from his post three months before his contract expires.
The 44-year old took on the job for the second time in 2014, having previously held the post in 2010-11.

Waqar Younis Tuesday begged forgiveness from the nation and said he was prepared to resign after his team was knocked out of the World Twenty20 at the group stage.

The 2009 champions have been widely blasted by fans following a lacklustre performance with just one victory against lowly ranked Bangladesh and big losses to India, New Zealand and Australia.
Team members were jeered on their return this weekend by huge crowds at Lahore airport, who chanted “Shame! Shame!”Addressing a press conference at the Pakistan Cricket Board headquarters in Lahore on Tuesday, Younis said: “I place my hands together and beg forgiveness from the nation.”