NEW DELHI : Ahead of a gruelling Indian Premier League schedule, Royal Challengers Bangalore captain Virat Kohli found time to travel to Jodhpur where his alleged lady love and actress Anushka Sharma was shooting for her latest Bollywood film. Ahead of the upcoming season of the Indian Premier League, Royal Challengers Bangalore skipper Virat Kohli flew down to Jodhpur to meet his alleged girlfriend and Bollywood actress Anushka Sharma, who is shooting for her next film there.
In spite of their hectic schedules, the rumoured love-birds have been taking time out from their busy schedules to make catch up on quality time together. Earlier this year, Anushka was spotted walking hand-in-hand with Kohli in Auckland during India’s tour of New Zealand. 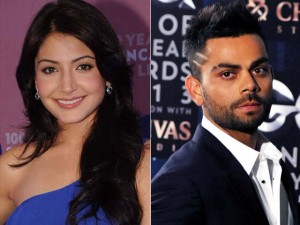 And ahead of the ICC World Twenty20, Kohli flew down to Sri Lanka to visit his ‘special friend’ on the sets of film, Bombay Velvet. Kohli emerged Man of the Tournament even though India lost in the final to Sri Lanka by six wickets.
According to reports, Kohli travelled to Jodhpur to meet Anushka, who is shooting for NH10 at a small village called Khejrala. Interestingly, neither the cricketer nor the actress tried to evade photographers this time.Though both, on different occasions, have ducked questions and denied rumours about their ‘relationship’, there sure seems to be more than what meets the eye in their ‘affair’. It won’t be too surprising if Anushka is spotted donning RCB colours and cheering on from the stands when the T20 tournament begins in Abu Dhabi on April 16. RCB play Delhi Daredevils on April 17.