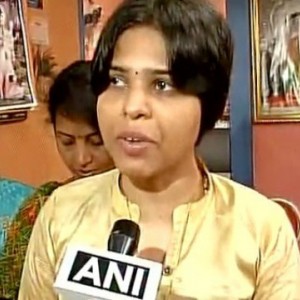 NASHIK: A day after the Bombay High Court ruled that it is the fundamental right of women to go into places of worship, around 25 women activists led by Trupti Desai today entered the premises of Shani Shingnapur temple in Maharashtra, but were stopped by locals from offering prayer in the inner sanctum.
Angry women villagers allegedly pushed the members of Bhumata Ranragini Brigade led by Ms Desai as they tried to enter the inner sanctum of the temple which according to tradition is forbidden for women.
Activist Desai, who had pledged to pray at the famous temple in the state’s Ahmednagar district, said: “We are not going to turn around we have the court order and if need be we will file an FIR (first information report) against the home minister and chief minister.”
“What is the police doing? They were directed to provide protection to us by the court,” Ms Desai said questioning the state government.The court on Friday ruled that offering prayers at a temple “is the fundamental right of a woman and the government’s fundamental duty to protect their (women) right.”
The Maharashtra government had said that it will take all steps to comply with the order by enforcing a law that provides six months in prison for preventing anyone from entering a temple.
Ms Desai has been stopped in the past by the police and hundreds of locals, including women, from forcing her way into the Shani Shingnapur temple.
Last year, after a woman worshipper managed to offer her prayers to the idol at the Shani Shingnapur temple, an elaborate cleansing ritual was immediately carried out by a priest.
Meanwhile, member of an action committee formed to maintain the 400-year-old tradition, Sambhaji Dahatonde said: “We will soon approach the Supreme Court against the High Court ruling as it is a matter of protecting the faith of devotees.”