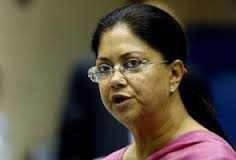 JAIPUR : Rajasthan Chief Minister Vasundhara Raje on Wednesday said the ruling party and the Opposition were two wheels of the chariot called democracy, and the Assembly Speaker “is the charioteer”
In her congratulation message on the election of Kailash Meghwal as the Assembly Speaker, Raje told the House that he had a great role to play in making balance between the two benches, and it was “the most healthy development that he was the unanimous choice of both ruling and Opposition members”.
Raje said the Assembly was not just a building made of cement, bricks and stones, but it was the temple reflecting sentiments of the crores of people of the state, and every single word being spoken here should be sacred and truthful.
“The voice uttered here echoed not only in the House, but in the entire country and world. Thus, it was responsibility of all its members to maintain and preserve the purity of the Assembly,” Raje said.
As the Leader of the House, Raje assured the Speaker that for the progress of the state, whenever required, she would certainly have dialogues with the Opposition members and take them into confidence. She suggested the government and the opposition made joint efforts to win trust of the people and thus strengthen the traditions of democracy.