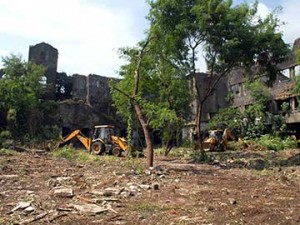 MUMBAI: A Mumbai court today framed fresh charges against three men convicted for two gang-rapes at the defunct Shakti Mills in Mumbai last year that could invite the death penalty. The court was due to pronounce the quantum of punishment today for the trio in one of the cases connected to the gang-rape of a 23-year-old photojournalist.
The three, Mohammed Salim Ansari, Vijay Mohan Jadhav and Mohammad Qasim Hafiz Shaikh alias Kasim Bengali, were also convicted on Friday for gang-raping an 18-year-old telephone operator at the deserted mill in the heart of the city last year and were sentenced to life in prison. The court accepted the prosecution’s application of charging the men under Section 376(E) of the Criminal Procedure Code (CrPC) that provides for enhanced punishment for “repeat offenders”.
“This special provision has been made to impose punishment of life imprisonment or death… The convicted are not convicted under section 376 (E) and, therefore they are still accused under this section,” the judge ruled.
The gang-rape of the young photojournalist had sparked massive outrage across the country, highlighting yet again the continuing lack of safety for women.The young photographer was on assignment at the mill with a male colleague when a gang of five men tied him up and took turns to assault her. The judge found three of the rapists guilty of offences that included showing pornography to her and forcing her to perform similar acts, stripping her, and destroying evidence.
The court is yet to decide on the fate of the fourth accused, Siraj Rehmat Khan. The fifth, a minor, is being tried separately by the Mumbai Juvenile Justice Board which will begin hearing the case next month.
Police had described the photographer’s attackers as unemployed school drop-outs, while neighbours say they were a gang of youths known for petty theft and drinking in the area.The teen phone operator came forward after reading about the photographer’s ordeal.