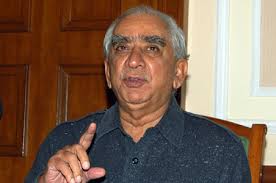 BARMER: After the BJP told him he cannot run as its candidate from Barmer in Rajasthan, Jaswant Singh has decided to go solo. He filed his nomination papers as an independent candidate this afternoon.
“I will not say good bye till the party says goodbye,” he said later, putting the ball on a possible expulsion firmly in the BJP’s court. On other fronts, he was less diplomatic. “NaMo NaMo ka jo tamasha hai (this circus around NaMo) and the way decisions are being taken nowadays reminds me of 1975 – the tradition of being inclusive has reduced, arrogance has increased,” he said, denouncing the party’s focus on its prime ministerial candidate, Narendra Modi.
At the alleged lobbying of Vasundhra Raje, the BJP has picked Colonel (retd) Sonaram Choudhary as the candidate from Barmer. The retired army officer quit the Congress for the BJP just days ago. Mr Singh’s supporters say it’s preposterous for a newcomer to be rewarded at the cost of a veteran. But the retired army officer is from the dominant Jat community in Barmer, which could make him a vote-getter.
“I hope Jaswant Singh sees reason, and retracts his decision to contest. If the party tells you to work for the party, you must learn to accept that,” said senior BJP leader Arun Jaitley this to a TV Channel  In 2009, Mr Singh was expelled after his book was seen as cheerleading for Mohammed Ali Jinnah, the founder of Pakistan. He was re-inducted 10 months later at the urging of LK Advani.

Adding to the new contretemps is the fact that Mr Singh’s son, Manvendra, represents the BJP in the Rajasthan legislature.

Though Mr Singh won the last national election from Darjeeling in West Bengal, he said he wanted to fight this one from Barmer because he was born here.