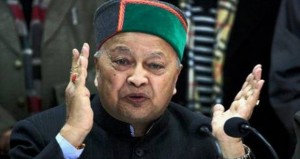 SHIMLA: Himachal Pradesh Chief Minister Virbhadra Singh, who is at the helm for a record sixth innings, finds himself enmeshed in legal wrangles in at least four cases in barely three months.Most of the cases relate to allegations of corruption against him. Virbhadra Singh has, however, denied any wrongdoing during all his tenures. The latest is the ordering of a retrial in a criminal defamation case pending against him for over eight years.
The Himachal Pradesh High Court Friday ordered the retrial in the defamation suit filed by state Subordinate Services Selection Board former chairman S.M. Katwal Hearing the petition, Justice D.C. Chaudhary directed the judicial magistrate in Una town for retrial. In another case pending against him, a public interest litigation (PIL) has been filed seeking a court-monitored investigation into allegations of corruption and a directive to the high court to reconsider a plea to implead him in the cricket body row.
“Even a faction of his own party is keenly monitoring the outcome of the latest status report filed by the CBI in the high court against Virbhadra Singh,” a senior leader told reporter.“We will examine the status report first. Renotify it 2 April,” a bench of acting Chief Justice B.D. Ahmed and Justice Siddharth Mridul observed 12 March.Senior counsel and AAP activist Prashant Bhushan’s NGO Common Cause’s plea alleged that it has made representation to the CBI and the Chief Vigilance Commission and, instead of registering a first information report, the CBI has lodged a preliminary enquiry.
In another setback to Virbhadra Singh, who is popularly known as “Raja Saab”, the Supreme Court March 15 asked the state high court to reconsider a plea by the state cricket body led by BJP MP Anurag Thakur to implead the chief minister and three government officials.
The Himachal Pradesh Cricket Association (HPCA) had moved the apex court. It alleged that the entire government machinery under the influence of the chief minister, in a midnight swoop Oct 26 last year, forcibly evicted the HPCA from the Dharamsala stadium.In another case, the high court 7 March issued notice to Virbhadra Singh, his wife Pratibha Singh and the state on a petition seeking condoning of delay in filing a plea against a lower court order which acquitted the couple in a 2012 corruption case.
The state police booked Virbhadra Singh and Pratibha Singh Aug 3, 2009, under the Prevention of Corruption Act for alleged misuse of official position and criminal misconduct when he was the chief minister in 1989. In 2009, the Bharatiya Janata Party government was in power in the state.
Another petition, again filed by Katwal, is pending in the high court in which he alleged that despite the state vigilance bureau registering a first information report in 2006 on the directions of the high court, no investigation was being carried out into the illegal recruitments between 1993 and 1998. During this period, Virbhadra Singh was at the helm.
But the chief minister has also sued Bharatiya Janata Pary leader Arun Jaitley, former chief minister Prem Kumar Dhumal and his sons, BJP MP Anurag Thakur and Arun Dhumal. In the three defamation suits filed in a Shimla court in January, Virbhadra Singh said Jaitley and the Dhumals unleashed a malicious campaign against him and his family through the media.