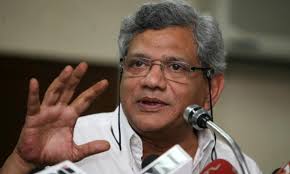 KOLKATA: Recent poll results show that the CPI(M), CPI despite in coalitions with big regional parties, couldn’t even manage 1 percent vote either in UP or in Punjab!
Karl Marx (no offence meant for great man), Lenin, Stalin or Mao who are they? Great men, replied former CPI general secretary A B Bardhan on his way to a public meeting in Bengal. “Fine, but you’ve none from India,’’ pat came the reply, Bardhan was mum.

And Left begins to fade out, if this election results are any indication. CPI(M) general secretary Sitaram Yechury “just inherited a powerful post to preside over liquidation of party, nobody quite knows,’’ quipped a veteran party leader in his late 80s.

It reminds us Netaji Subhas Chandra Bose’s analysis of Communist Party of India in his Indian Struggle. They did not embrace India as India and Indians but see them through Russian lens, Bose noted and attracted vitriolic criticism from Communists and British trained Fabians like J Nehru.

But after decades Bose proved correct for both the parties – dissipated Left and dynastic Congress.You have BJP and Narendra Modi who not only won an election with a majority that nuked all of them in UP but without talking much about labour and working-class and see what we have done, it’s not that reform-driven agenda has exiled both from our society with their problems,’’ regretted a left leader.

Even we don’t talk about either of these classes and their issues, but like Bose said we’re still enjoy the disconnect, isn’t it? He asked.Just see there was a Left party, Socialist Unity Centre of India (SUCI) which (out of CPI(M)-led Left Front) once launched a sustained campaign for return of English in Bengal schools’ primary level for 20 years, and was loved and supported by all the people who did want the same.
But now they only want to celebrate November Revolution in Soviet Union, and people did not like it,’’ pointed out a former SUCI member.Thus Sitaram Yechury has a hard task. Killing of Left began with Monmohan Singh’s reform which has been Narendra Modi`s  success story and petering out of Left.

Even in West Bengal situation isn’t any different. The Trinamool Congress is taking out issues one after another from Left. “It’s now a party without any winds in its sail,’’ said a Left intellectual.

It could be the beginning of last rituals of Swan Song, may be who knows. Ritrabrata Banerjee, CPI(M) MP who sports an expensive watch and pen and is proud about them in Facebook, despite censure a symbol of fading out or an effort to accommodate the change.