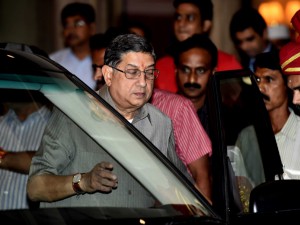 NEW DELHI: The Supreme Court today slammed suspended Indian cricket board president N Srinivasan for conflict of interest and questioned whether he could own a team in the Indian Premier League (IPL). Questioning Mr Srinivasan’s comeback as the president of the Board for Control of Cricket in India or BCCI, a special bench asked, “You want to sit over the liquidation of the game?”
The court, while examining the inquiry report on IPL corruption on Monday, said Mr Srinivasan’s ownership of the Chennai Super Kings team raised conflict of interest. “Can BCCI president own a team? How far is this fair? You can’t make a distinction between BCCI and IPL. IPL is a by-product of BCCI,” the judges said. Mr Srinivasan was suspended as BCCI president by the Supreme Court pending investigations into corruption in IPL. Currently the chairman of the International Cricket Council, he has asked the top court to allow his re-election as board president on grounds that he has been cleared of corruption charges.
The judges responded, “You are only assuming that you have been given a clean chit. The question is if you should at all be serving the BCCI.” The Justice Mukul Mudgal report on spot-fixing in IPL has said Mr Srinivasan is “not involved with match fixing activity” and has “not found to be involved in scuttling the investigations into match fixing”. But it has accused him and other IPL officials of “covering up” the misdeeds of an unnamed player who violated Players Code of Conduct.
The report called these “misdemeanours.” Mr Srinivasan’s son-in-law Gurunath Meiyappan has been indicted for betting. Chennai Super Kings, led by India captain Mahendra Singh Dhoni, are two-time IPL champions. The judges said: “Some people who are in BCCI now own a team. Now it has become a mutual benefit society.” They added: “If people know that a game is fixed who will visit the stadium? In India, cricket is like a religion. Recognition comes when one lakh people in Eden Gardens applaud.” On Mr Srinivasan’s chances of returning as BCCI boss, the judges said: “One of the employees (Meiyappan) of your team was involved in betting. You have to reply because it will affect the position and the dignity of BCCI president position.”