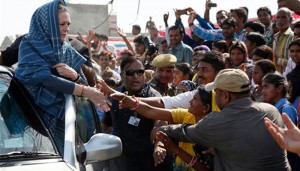 NEEMUCH: Congress president Sonia Gandhi on Thursday assured farmers in Madhya Pradesh, who suffered severe crop loss due to the recent untimely rains, that she will fight for their rights and ensure adequate compensation for them.
Gandhi arrived this morning at the Neemuch air strip to meet farmers in the district and take stock of the damage caused to the crops due to unseasonal rains and hailstorm in various parts of the state recently. She is also scheduled to visit more villages later in the day. The Congress chief surveyed damaged crops in Madavada by walking nearly half a kilometre in the fields. “Though we do not have a government in Madhya Pradesh, we are with you. We will fight for your rights and ensure that you get due compensation,” Gandhi told farmers during an interaction. Farmers also showed her ravaged Isabgol (psyllium husk) and other crops and also narrated their ordeal. In the morning, she met the rain-affected farmers in Hingoria Fatak village. Gandhi has so far visited Jamunia Kalan, Bhatkheda, Maalkheda, Nevad, Semli Chandrawat, Sarvania Maharaj, Morvan, Madavada villages in the district. Later, she headed towards Diken and Kanjarda villages in Neemuch to meet the farmers.