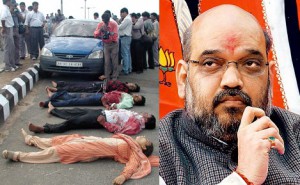 MUMBAI: In a big relief to the Bharatiya Janata Party (BJP) national president Amit Shah, a special CBI court on Tuesday gave him a clean chit in the fake encounter of Sohrabuddin Sheikh. The case was transferred from Gujarat to Mumbai earlier this year.
In September 2013, the CBI had chargesheeted Shah – the former Home Minister of Gujarat – and 18 others, including several police officers. Shah was charged with criminal conspiracy, destruction of evidence and offences under the Arms Act.
According to the CBI, Sohrabuddin Sheikh and his wife Kauser Bi were kidnapped by Gujarat’s Anti-Terrorism Squad in November 2005 and killed in a fake encounter. The Gujarat Police had claimed Sohrabuddin had links with Pakistan-based terror outfit Lashkar-e-Toiba and planned to assassinate important political leaders.
A year later in December 2006, Tulsiram Prajapati, a witness to the encounter, was killed by the Gujarat Police, who claimed he had been trying to escape from custody.
The CBI alleges that Shah, who was Gujarat’s home minister at the time, was involved in both killings as the police reported to him.
Shah, who was in the Gujarat cabinet led by then Chief Minister Narendra Modi, stepped down in 2010 after he was arrested in the case. He got bail three months later.