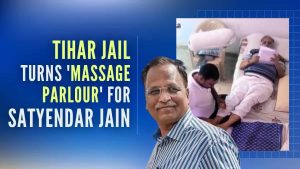 NEW DELHI :  The controversy over the viral video of Delhi minister Satyendar Jain getting a massage in jail has taken a new turn. The video is about a prisoner who is accused of raping his own daughter who is studying in class 10th. In a new revelation, the BJP has demanded an apology from Delhi Chief Minister and AAP chief Arvind Kejriwal.
According to official sources in Tihar Jail, the person massaging the AAP minister in the security video is Rinku, who has been charged with rape under the stringent Protection of Children from Sexual Offenses (POCSO) Act. He was arrested last year after his daughter, a Class 10 student, accused him of assault.
Significantly, on Saturday, AAP came under criticism when a video of Jain allegedly getting massages and meeting people in jail surfaced. The Bharatiya Janata Party (BJP) and the Congress have demanded his sacking. Raised questions on the ‘silence’ of Chief Minister Arvind Kejriwal.
Jailed Aam Aadmi Party minister Satyendar Jain on Saturday moved a court here against the Enforcement Directorate (ED) for allegedly ‘leaking’ a CCTV footage from inside Tihar Jail to the media. Requested to take contempt action. In his petition, Jain accused the ED of leaking the CCTV footage, saying “despite the undertaking made in the court” that no material related to the case would be given to the media, it was not followed through. A purported video of AAP leader Satyendar Jain, in which he can be seen getting a foot massage while lying on a bed in Tihar Jail, has gone viral on social media.
Bharatiya Janata Party’s national spokesperson Shahzad Poonawalla has disclosed this by tweeting. Poonawala has demanded Kejriwal to resign from the post of Chief Minister. Poonawalla writes in another tweet, what can be more shameful than this? The accused of sections 376, 506 and 509 of the Criminal Code along with Pasco from a daughter were made Satendra’s masseur. Is there a deal behind this to save this rapist? Shahzad wrote in another tweet – Satyendar Jain gets a massage done in Tihar Jail by an accused of raping a daughter. Manish Sisodia was calling him a therapist. But he is not a therapist but Rinku, accused of rape.The Aam Aadmi Party (AAP) had claimed that Jain was undergoing physiotherapy. Deputy Chief Minister Manish Sisodia had claimed that Jain was advised physiotherapy due to a spinal injury, but the BJP was making fun of his illness. 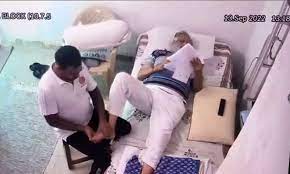 Earlier on Saturday, the former PRO of Tihar Jail said that it cannot be physiotherapy as it is clearly visible in the video that co-prisoners were massaging him. Former Tihar Jail PRO Sunil Gupta told that it is clear from the video that other inmates of the jail were massaging the minister. He said, ‘Massage is different from physiotherapy. Physiotherapy is given in the physiotherapy ward in the hospital.’ In the CCTV footage from September 13, the minister is seen lying on his bed and reading some paper, while a man sitting next to him is seen massaging his leg .
On the other hand, BJP MP Manoj Tiwari tweeted, ‘Shame on you Arvind Kejriwal. Doctors have confirmed that it is not physiotherapy and the person massaging Satyendar Jain in Tihar Jail is a rapist, an accused under POCSO and not a physiotherapist as you are saying.
On Monday too, Arvind Kejriwal strongly refuted BJP’s charge of giving VIP treatment to his minister by sticking to the “physiotherapy, not massage” argument. “They are calling it massage and VIP treatment, but it is only physiotherapy,” Kejriwal told reporters on the sidelines of his campaign rally in Gujarat’s Vadodara.
Meanwhile, the Indian Association of Physiotherapists has demanded an apology from the AAP party for the humiliating physiotherapy, refuting the claims that Jain was given treatment. Let us tell you that Delhi Deputy Chief Minister Manish Sisodia had accused the BJP of leaking CCTV footage and said that the ‘physiotherapy’ was due to a spinal injury. Only BJP can make a dirty joke by leaking the footage. Jain’s spine was fractured, it is on record.
The videos surfaced days after Mr Jain, arrested in a money laundering case, was accused of receiving special treatment inside Tihar Jail. The allegation of “VIP treatment” has led to the transfer of at least 12 Tihar Jail officials, besides Director General (Prisons), Sandeep Goel. Mr. Jain was seen getting massages and talking to people sitting in his cell, which is not allowed in the jail. Physiotherapy sessions are not allowed in the prisoner’s cell, officials said