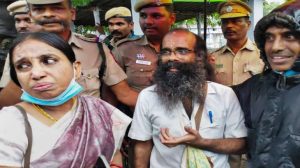 NEW DELHI : Facing criticism from the Congress, the government on Thursday moved the Supreme Court seeking a review of its order for premature release of six convicts in the assassination case.The Centre said the order granting remission to the convicts, who had assassinated the former prime minister, was passed without affording it adequate opportunity for hearing despite it being a necessary party to the case.

The government highlighted the alleged procedural lapse, saying the convicts seeking remission did not formally implead the Centre as a party which resulted in its non-participation in the case. “Thus absence of any assistance by the Union of India, due to procedural lapse of convicts/petitioners, while the present matter was being finally heard and decided has prevented this Court from appreciating the crucial and important evidence in the matter, which if presented, would have assisted this court to arrive at a just and correct judgment in the matter,” it said.
The Centre contended that the release of the convicts was cleared without it being given an adequate hearing which has led to an “admitted and glaring breach of principles of natural justice and has, in fact, resulted into miscarriage of justice”. Former Congress President Sonia Gandhi, Rajiv Gandhi’s widow, had supported the death sentence of four convicts being commuted. Their daughter Priyanka Gandhi Vadra had also met one of the accused and forgiven her. However, the party leadership has disagreed with the Gandhis and reacted strongly. 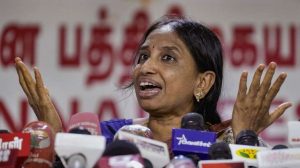 The Congress party will challenge the Supreme Court’s recent order granting early release to six convicts who were imprisoned for the assassination of former Prime Minister Rajiv Gandhi in 1991.
The Congress party on Monday said that it will challenge Supreme Court’s order to release convicts in former PM Rajiv Gandhi assassination case. Earlier on Thursday, the Congress took a swipe at the government for filing a review petition in the Supreme Court against the release of convicts, saying it is “a case of belated wisdom”. “Government’s decision to file review petition against the release of Rajiv Gandhi assassination convicts is a case of belated wisdom dawning,” said AICC general secretary (organisation) K C Venugopal. “BJP government has been blatantly apathetic towards this case. What’s the point in locking the door after the horse has bolted!” he said on Twitter.
On 11 November, the top court released Nalini Sriharan, her Sri Lankan husband Murugan, Robert Pais, R.P. Ravichandran, Santhan and Jaikumar, noting that they had been jailed for over 30 years. The bench of Justices B.R. Gavai and B.V. Nagarathna passed the order following a direction in May which had freed A.G. Perarivalan, another life-term convict in the case.The Congress reacted sharply that day, saying the top court had not “acted in consonance with the spirit of India”.
Ten days after their release, Congress has said it will file a fresh review application challenging the freeing of convicts of the Rajiv Gandhi assassination case. The grand old party had earlier termed the release of the killers as “unfortunate” and “unacceptable”. The Centre, too, had on Friday filed a petition in the Supreme Court asking it to review the order, after the six people, including a woman, were released from prison in Tamil Nadu.The BJP-ruled Centre and the Congress are on the same side in this emotive political issue.
General Secretary in-charge of Communications, Jairam Ramesh, had said: “The Supreme Court’ decision to free the remaining killers of former PM Rajiv Gandhi is unacceptable and completely erroneous. The Congress criticises it and finds it wholly untenable.” The BJP-ruled central government also filed a petition last week in the Supreme Court, seeking a review of the order.
“The decision of the Supreme Court to free the remaining killers of former PM Rajiv Gandhi is totally unacceptable and completely erroneous,” the party had said. Rajiv Gandhi was killed by a suicide bomber while campaigning for an election on behalf of the Congress party in Tamil Nadu’s Sriperumbudur in May 1991. Seven people were sentenced to life in the case.
All seven convicts were incarcerated for over three decades for Rajiv Gandhi’s murder in Sriperumbudur, Tamil Nadu. Four of them, including Nalini, were to hang but their death sentences were later commuted to life. On 11 November, the top court had said of Nalini: “…she is a woman and has been incarcerated for a period of more than three decades… She has also undertaken various studies.” Nalini served her sentence in a special prison for women in Vellore for more than 30 years, while Ravichandran was in the Central Prison in Madurai.
The court had said its decision was based on the prisoners’ good behaviour and the release in May of AG Perarivalan, another person convicted in the case, saying that he was 19 years old at the time of arrest and had been jailed for more than 30 years, with 29 of those in solitary confinement.
In May 1999, the top court had upheld the death sentences of four convicts — Perarivalan, Murugan, Santhan and Nalini.Nalini’s death sentence was commuted to life imprisonment in 2001 on the consideration that she has a daughter. In 2014, the apex court also commuted the death sentences of Perarivalan, Santhan and Murugan to life imprisonment on grounds of delay in deciding their mercy petitions.
In 2008, Priyanka Gandhi had met Nalini in prison, in order to come to terms with the “loss and violence” she had experienced. “Why did you do it?” Priyanka had asked Nalini before breaking down. Then she reportedly gave the convict a patient hearing. Priyanka has maintained that she didn’t believe in anger, hatred and violence, and couldn’t allow these things to “overpower my life”.
The Centre on Thursday moved the Supreme Court seeking a review of its order for premature release of six convicts in the Rajiv Gandhi assassination case, facing criticism from the Congress. The Centre said the order granting remission to the convicts was passed without affording it adequate opportunity for hearing despite it being a party to the case. The government highlighted the alleged procedural lapse, saying the convicts seeking remission did not formally implead the Centre as a party, which resulted in its non-participation in the case.