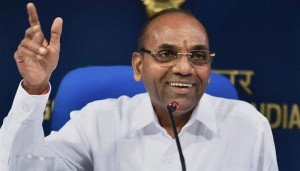 NEW DELHI : As expected, the Shiv Sena on Monday announced that Union Heavy Industries Minister Anant Geete would resign from the Modi government.The announcement was made by Sena president Uddhav Thackeray. Geete would formally tender his resignation after Prime Minister Modi returns from the US.
Importantly, the BJP, which had claimed that it held no animosity towards Sena, had been refusing to take a clear stand on the issue.
“The party has to take a decision. We have not had any discussions about him. The issue has not come into our consideration yet,” senior party leader and Home Minister Rajnath Singh said yesterday.”It’s very unfortunate. We discussed it for long but, unfortunately, it (the talks) did not work out,” he said.However, the Shiv Sena has held no such feelings of warmth towards the BJP post the split.
An editorial in party mouthpiece Saamna dubbed those who broke the 25-year-old alliance as “enemies of Maharashtra.””Our other (Mahayuti) alliance parties wanted the Sena-BJP combine to continue. More than that, it was what the 11 crore people of Maharashtra wanted. Those who trampled these sentiments are enemies of Maharashtra,”
“This (breaking of alliance) is an insult to the 105 Marathi martyrs of the Samyukta Maharashtra movement,” an editorial in Sena mouthpiece ‘Saamana’ said here.”It is unfortunate that the Sena-BJP alliance which for the last 25 years was bound by the Hindutva ideology has ended,” the Sena said.
Interestingly, MNS chief Raj Thackeray has also hit out against the BJP for breaking ties with Shiv Sena.“Do you think that the BJP can now be trusted after what they did to the Shiv Sena? Some BJP leader told me that they had planned the break-up long ago. Did Uddhav not understand this? If Balasaheb would have been alive today, he would have broken the alliance a month ago itself,” Thackeray said, addressing his maiden election rally.
President’s Rule was imposed, yesterday, in poll-bound Maharashtra after Chief Minister Prithviraj Chavan resigned following the break-up of 15-year-old Congress-NCP alliance in the state.Maharashtra assembly polls are scheduled to be held on October 15.