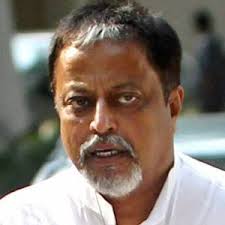 KOLKATA: The Central Bureau of Investigation (CBI) has summoned Trinamool Congress (TMC) general secretary and Rajya Sabha MP Mukul Roy in connection with the multi-crore Saradha scam.
Mr. Roy has been asked to appear before the CBI officers, who are investigating the scam, by the end of the week.CBI has sent a letter summoning TMC MP’s official residence in Delhi.
Earlier, an e-mail was sent to MP’s office for “clarifying the address” of Mr. Roy’s residence where the formal notice could be sent. “Upon receiving the clarification, the letter was sent MP’s residence in Delhi,” sources told .
Till recently, TMC’s general secretary Mukul Roy was considered to be the second most important person in the party. He was often described as the “eyes and ears” of the Chief Minister, Mamata Banerjee and almost single-handedly managing the organisation.

However, after the recent spate of arrests of top TMC leaders, Ms. Banerjee was publicly distancing herself from her MP Mr. Roy who made very few public appearances along with the Chief Minister. He was absent from the biggest business summit hosted by TMC-led government last week in the city. Additionally, Ms. Banerjee was promoting her nephew Abhisek Banerjee in recent months, fuelling speculation that TMC leadership is expecting CBI to summon Mukul Roy.
In December 2014, another powerful TMC organiser and Transport Minister, Madan Mitra was summoned and arrested by the central agency. The party is now hoping that the second-in-command will only be grilled and not arrested by the CBI.