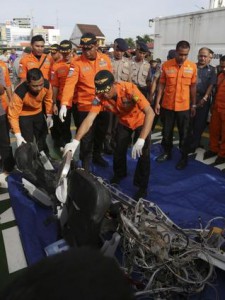 PANGKALAN BUN( Indonesia) : Divers retrieved one black box and located the other underwater on Monday from the AirAsia plane that crashed more than two weeks ago.
The cockpit voice recorder was found just hours after officials announced the data flight recorder had been pulled from beneath a piece of the aircraft’s wing and brought to the surface, said Suryadi Bambang Supriyadi, operation coordinator at the National Search and Rescue Agency.
Divers began zeroing in on the sites a day earlier after three Indonesian ships picked up intense pings from the area, but they were unable to see the devices due to strong currents and poor visibility.
The two instruments, which emit signals from their beacons, are vital to understanding what brought Flight QZ8501 down on December 28, killing all 162 people on board.
The flight data recorder was lodged in debris from the wing at a depth of about 100 feet, Mr. Supriyadi said. Once it was found, divers concentrated on locating the source of the other ping heard only a few metres away.
Once the second device is recovered, both boxes will be taken to Jakarta for analysis. It could take up to two weeks to download their information, said Nurcahyo Utomo, an investigator at the National Committee for Safety Transportation.