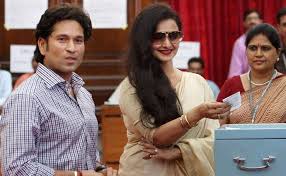 NEW DELHI : Cricket legend Sachin Tendulkar and actor Rekha have rarely been seen in Parliament since they became members two years ago, and many of their colleagues today said their poor attendance was unacceptable.”Sachin attended the house just for three days. Rekha came just seven days” CPI member P Rajeev said in Rajya Sabha, citing a rule that says if a member is absent for 60 days, the House can declare his seat “vacant”.
Rajya Sabha Deputy Chairman PJ Kurien replied that Sachin had been absent for 40 days and Rekha even less. “Both Sachin and Rekha are yet to cross that threshold. No violation of the Constitution has occurred,” he said. While he was missed in Parliament, Sachin indicated in a tweet that his brother was unwell. “A big thank you to all my friends for their prayers n good wishes. My brother Ajit is recovering well after undergoing a bypass surgery,” he posted.
Celebrity parliamentarians are notorious for their poor attendance. But Sachin Tendulkar probably has the worst record of all.The 41-year-old master blaster, who retired in November, has not attended a single session of Parliament this year. He showed up for three days last year and has not participated in any debates in the House so far.
An embarrassed Congress, which nominated Sachin and Rekha to the upper house, says both members have been spoken to.”They should attend Parliament more frequently, but Sachin and Rekha have not taken a single MP privilege. Next week, Rekha is coming,” Congress leader Rajeev Shukla said.When Sachin was sworn in as a member of the Rajya Sabha in June, 2012, he had promised to champion the development of sports in India.
Poet-lyricist Javed Akhtar, a fellow Rajya Sabha member, remarked, “Membership is not a trophy that he took it and went. He has a responsibility and should come.”The Nationalist Congress Party’s DP Tripathi said, “As a cricketer I admire Sachin Tendulkar and Rekha ji as an actor. But their absence in parliament is not at all acceptable.”
Last week, attendance data compiled till July 25 revealed that Bollywood star Hema Malini, a contemporary of Rekha, had not attended the first session of the newly elected Lok Sabha at all. Neither has Bengali actor Tapas Pal.Since the report came out, Hema Malini has been a regular in Parliament.